Descriptions of pest species, their damage, and control recommendations are based on results of research conducted throughout the peanut-growing areas of the southern United States. Pest species included in this fact sheet are those that occur most commonly in Oklahoma. Information regarding each pest is designed to assist producers to identify pests and assess population and/or damage levels before beginning insecticide applications. Treatments should be made only when economically damaging pest populations exist. Unwarranted treatments will reduce profits and will have the detrimental effect of destroying parasites and predators that help control pest species.

Discussion of peanut pests is divided into two categories: (1) those associated with plant structures at or below the soil surface; and (2) foliage-feeding species which damage leaves and terminal buds.

This small, slender larva lives beneath the soil surface in tubes constructed of soil particles woven together with silken material. This insect is bluish-green in color with several brown bands across the body and a dark brown head. The length of the full-grown larva is 3/4 inch. Larvae are easily distinguished from other caterpillars in peanuts by their unique behavior. LCB larvae attempt to escape by a flipping motion of their bodies when disturbed.

Damage in seedling peanuts frequently contributes to stand reduction as plant mortality results from girdling of stems and feeding on roots. Damage includes destruction of pegs as they enter the soil, thus preventing pod formation. Developing pods are scarred by surface feeding and hollowed by tunneling of larvae. Portions of plants may be killed due to tunneling in stems. Damage frequently results in serious yield reductions that are related directly to LCB injury (Figure 1). In addition, damaged portions of plants may become infected by fungal pathogens leading to further reductions in yield and grade of peanuts. High incidence of infestation by pod-rotting fungi in association with LCB damage has also been reported.

Control Considerations: Keeping land free of volunteer peanuts and weeds several weeks before planting will help prevent damage from LCB’s in seedling peanuts. Producers should begin checking at least five locations in each field in late June and continue weekly checks until September. In larger fields at least one location should be selected in each five-acre area. It is important that samples be taken across the entire field to avoid poor population estimates. As the number of locations per field increases, the more accurate estimates become. A minimum of five plants should be examined at each location by removal from the soil and careful observation of the roots, pegs, and pods for damage and larvae. Soil around the plants should be disturbed minimally and examined for larvae that have been dislodged.

Current control costs and value of harvested peanuts considered along with information in Figure 1 indicate that insecticides may be applied profitably in nonirrigated peanuts when 8-10% of the plants are infested. Somewhat higher infestation levels (15%) may be tolerated in irrigated peanuts before insecticide use is suggested.

Table 1. Infestation levels are calculated from this table.

During daylight hours this larva is typically found on the soil surface beneath peanut foliage. It has mottled gray and tan coloration with many small, dark granules over the surface of the body. The length of the granulate cutworm is 1 -2 inches.

This species seldom damages large acreages of peanuts in Oklahoma, but may reach high population densities in some areas during August and September. It feeds principally during nighttime hours on plant foliage, pegs, and pods. The most serious yield reductions attributable to this pest result from clipping of pegs from plants and tunneling into pods.

Control Considerations: Field checks for granulate cutworms can be accomplished at the same time that sampling is conducted for lesser cornstalk borers. At present, it is recommended that general guidelines for controlling cutworms and armyworms be followed for this species (dryland peanuts = 3-5 larvae/row ft.; irrigated peanuts = 6-8 larvae/ row ft.); however, if cutworm feeding is visible and widespread on pegs or pods, treatment should begin if larval numbers exceed two-three per row ft. in both irrigated and dryland peanuts.

These tiny, slender-bodied insects are found primarily on peanut blooms and between folds of young leaflets in plant terminals. The length of thrips is 1/20 inch. Thrips are common in seedling peanuts in all areas of Oklahoma. They possess rasping-sucking mouthparts which they use in tearing tender leaf surfaces for removal of plant sap. Thrips feeding results in malformation and curling of leaves and causes a condition known as “pouts.”

Two thrips species common to Oklahoma are known vectors of tomato spotted wilt virus (TSWV). This virus causes ring spots and oak leaf patterns on peanut leaves. The leaves may also become distorted and the plant may be stunted. Initially, a general yellowing may occur on the plant with little or no additional symptoms. Plants can be killed by the disease.

In 1989 and again in 1991, TSWV was reported in Oklahoma. The incidence of TSWV is very low and presently confined to production areas along the Red River. Until TSWV is proven to be a serious threat to Oklahoma peanuts, the stance on thrips control will remain as indicated below.

Control Considerations: Research conducted in several states since 1972 has not shown any yield response controlling thrips populations (up to 50 per plant terminal). It is strongly recommended that insecticide applications be based on actual field populations. Insecticide applications should be restricted to those instances where very high population densities exist and severe damage with destruction of plant terminals occurs in seedling peanuts.

The most common member of this group that infests peanuts in Oklahoma is the potato leafhopper. The length of leafhoppers is 1/4 inch. This tiny, wedge-shaped insect is light green in color and is often located on the undersides of leaves.

Leafhoppers migrate into peanut fields in June and July and populations may persist until September. They feed primarily along leaf veins with piercing-sucking mouthparts and cause yellowing of foliage. Discoloration and death of tissue begins at leaf tips and produces the symptom known as “hopperburn.” High leafhopper population densities may cause extensive discoloration and stunting of plant growth.

Control Considerations: Control of leafhoppers is not recommended unless heavy populations are present and extensive evidence of “hopperburn” and stunting of growth is noted. Threshold information from Georgia suggests treatment when hopperburn is heavy in 25 percent or more of the field and leafhoppers are readily seen flying as you walk the field.

Coloration of larvae varies from pink to black. The usual color is light green with alternating light and dark bands lengthwise on the body. Their length is 1 1/2 inches. Small larvae cause ragging of leaves by feeding on leaflets in plant terminals. Larger larvae feed on all foliar portions of plants and may cause extensive defoliation from July through September.

Control Considerations: During much of the growing season, peanuts can tolerate considerable defoliation without serious yield reduction and insecticide applications for foliage feeding caterpillars are not required. It is important to be aware that these species are attacked by a variety of beneficial organisms that provide natural regulation of pest populations. Frequently, serious damage by foliage feeders results from destruction of beneficials with unwarranted insecticide applications.

The threat of yield reduction due to defoliation exists primarily when plants are from 60 to 90 days old. Producers should check fields frequently during July and August for the presence of earworms and armyworms and apply insecticides if populations exceed 3-5 larvae/row ft. in dryland or 6-8 larvae/row ft. in irrigated peanuts.

Larvae are light colored with a red band around the first two segments behind the head. This insect feeds almost exclusively in terminal buds. The length of the rednecked peanutworm is 1/3 inch. The peanutworm is the most common foliage-feeding larva in Oklahoma peanut fields. Larvae feed within buds and unopened leaflets and produce ragging of leaves as they enlarge. Feeding may extend over a period of several weeks from late June through September with resulting destruction of terminal buds and stunting of plant growth.

Control Considerations: Research results have indicated that peanuts can tolerate considerable feeding by the peanutworm without reduced yields. Unless populations become quite heavy (80 percent to 100 percent terminals infested) or infestations occur in combination with other foliage feeders such as the corn earworm, insecticide applications are unwarranted.

These close relatives of insects are very small. Their length is 1/50 inch. Leaves of lightly infested plants become yellow to gray in appearance. When peanuts are heavily infested, foliage turns brown or reddish-brown, and leaves often drop from plants. Severely damaged plants often die. Infestations typically begin in small areas which may be only a few feet in diameter within fields or along field borders. During hot, dry weather, spider mites can complete a generation in 9 to 12 days. Thus, in some years, numbers of mites can become extremely large by late August.

Control Considerations: Naturally occurring beneficial organisms usually provide effective control of spider mites. Unnecessary pesticide applications may promote mite infestations and add to the growing problem of insecticide resistance in mites. Spot treatment of damaged areas should be considered as an alternative to spraying entire fields. When chemical controls are applied for mites, ground-rig applications are preferred where high gallonage and adequate coverage can be assured. The use of drop-nozzles is encouraged to penetrate within the peanut canopy. If aerial application is conducted, 3 to 5 gallons/acre should be utilized. Thorough coverage of plant foliage is essential for control. Fields should be checked within 3 to 5 days of application to determine if further treatment is required. Alternating compounds used in multiple applications will help prevent buildup of resistant populations of mites. 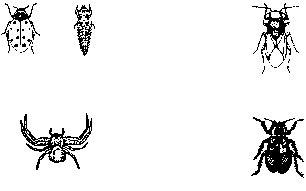 Typical larvae of the common insect species found in Oklahoma peanut fields during the mid- and late-season are examined.

Growers must be educated in order to properly identify diseases and implement appropriate controls.