Producers reported excellent yields east of I-35. Grain yields were helped by abundant rainfall in June and cooler than average temperatures in July.  Grain yields at the Enid location were similar to 2013.  The Ponca City location had grain yields over 200 bu/ac, which are the highest obtained in the last 16 years of testing.  In the Panhandle region a storm on June 30th with high winds led to some fields being cut for silage or baled due to green snap.  Grain yields for the drip location at OPREC were some of the highest ever obtained at this site.

Each year the Oklahoma Cooperative Extension Service conducts corn performance trials in Oklahoma. These trials provide producers, extension educators, industry representatives, and researchers with information on corn hybrids marketed in Oklahoma. Company participation was voluntary, so some hybrids marketed in Oklahoma were not included in the test. Company or brand name, entry designation, plant characteristics, maturity information, and trial locations were provided by the companies and were not validated by OSU; therefore, we strongly recommend consulting company representatives for more detailed information regarding these traits and disease resistance ratings (Table 1).

Irrigated test plots were established at the Oklahoma Panhandle Research and Extension Center (OPREC) near Goodwell and the Joe Webb farm near Guymon. Three rainfed trials were planted in north central Oklahoma near Burlington, Enid, and Ponca City. Fertility levels, herbicide use, and soil series (when available) are listed with data.  Individual plots were two 25-foot rows seeded at a target population also listed with the data.   Plots were trimmed to 20 feet prior to being harvested to determine grain yield. A separate ensilage trial was planted with 10 feet of one row harvested to determine yield. Experimental design for all locations was a randomized complete block with four replications. Grain yield is reported consistent with U.S. No. 1 grade corn (56 lbs/bu and adjusted to moisture content of 15.5 percent). Corn ensilage was harvested later than optimum for some hybrids in 201 with a moisture content of less than 55 percent and production is reported as tons/ac adjusted to 65 percent moisture.

The winter and early spring was one of the driest on record (Table 1). This lead to soil moisture being limited in some areas, and planting delays due to dry conditions (Figure 1).   Although most corn in the body of the state was planted in late March or early April.
In the Panhandle planting started mid-April and continued with short interruptions due to precipitation.  Pre-irrigation was required for emergence of most irrigated corn in the Panhandle for emergence due to lack of rainfall throughout the winter and early spring. Precipitation was limited in most regions until late May after which it was at or above the long-term average.  Temperatures during grain fill generally late June and July were near or below the long-term average (Figure 2). The average to above average yields can also be attributed to the above average precipitation in June (Figure 3).  With the cooler temperatures and the rainfall the highest grain yields in the last 16 years of testing were obtained at the Ponca City location.  For the panhandle region the cooler temperatures in July allowed for excellent pollination for corn that was able to withstand a storm on June 30th which had winds in excess of 60 mph.  Some fields in the panhandle were baled or  chopped for silage due to green snap from the storm (ratings for the trials at OPREC are only for companies that entered the trials, all companies had hybrids that green snapped from conversations with producers).  No major insects or diseases were reported during the growing season.  With the cooler temperatures in July and August harvest was later than normal for all regions of the state. 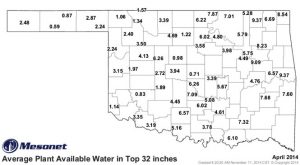 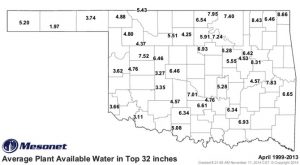 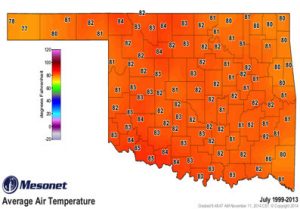 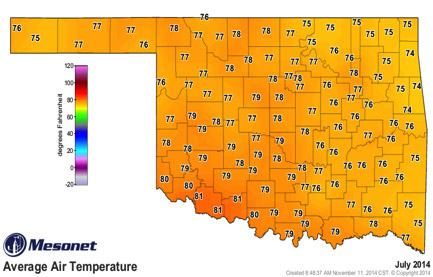 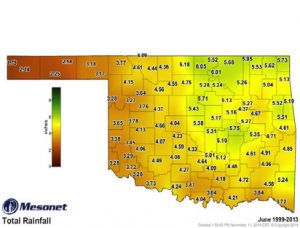 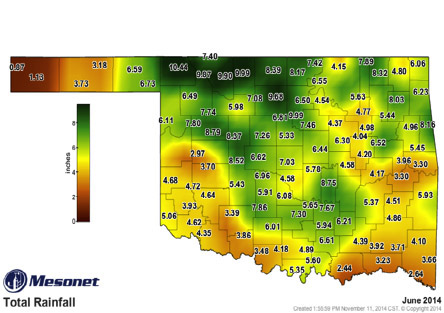 Figure 3. Departure from the average rainfall for June 2014.

Grain yield, test weight, harvest moisture, and plant populations for are presented in Tables 2 through 6.  Least Significant Differences (L.S.D.) are shown at the bottom of each table.  Unless two entries differ by at least the L.S.D. shown, little confidence can be placed in one being superior to another. The coefficient of variation (C.V.) is provided as an estimate of the precision of the data with respect to the mean. To provide some indication of yield stability, 2-year means are also provided in tables when available.  Producers interested in comparing hybrids for consistency of yield should consult these.

The use of uniform germination and emergence in corn plants for optimizing corn yields.