Pierce’s disease of grapes (Vitis spp.) is caused by the bacterial plant pathogen, Xylella fastidiosa subsp. fastidiosa. This disease is a serious concern for grape growers because once vines are infected, there is no cure and vines will eventually die. Since 2009, Pierce’s disease has been detected in several Oklahoma vineyards, and there is concern that Oklahoma grape producers will experience heavy losses similar to California and Texas. Thus, Pierce’s disease poses a threat to the vitality of viticulture in Oklahoma, and measures must be implemented to reduce its impact in the state.

Pierce’s disease can spread several ways. Sharing cuttings with other growers may lead to the accidental introduction of infected vines to new vineyards. Once Pierce’s disease is established, there is potential for spread among vines via pruning shears. Also, vine-to-vine transmission is aided by insect vectors. Key vectors include several species of sharpshooters, a group of leafhoppers that feed on xylem tissue where X. fastidiosa resides. These sucking insects are the most common source of disease transmission. Because they feed on a wide variety of plants that can harbor X. fastidiosa, weed management within the vineyard is an important strategy to reduce disease transmission. Effective management of Pierce’s disease depends on correct identification of key vector species, monitoring their presence in the vineyard, and applying broad-spectrum insecticides when peak numbers are detected.

The sharpshooters Graphocephala versuta, G. coccinea, and Oncometopia orbona commonly occur in Oklahoma vineyards. Of these, G. versuta is the most prevalent species. Graphocephala hieroglyphica, Cuerna costalis and Paraulicizes irrorata also occur in Oklahoma, but are rarely collected in vineyards. In research trials, individuals of G. versuta collected within vineyards and those nearby, demonstrated the ability to transmit X. fastidiosa to susceptible plants. However, all of these species are potential vectors of Pierce’s disease in Oklahoma because they are known carriers of X. fastidiosa. 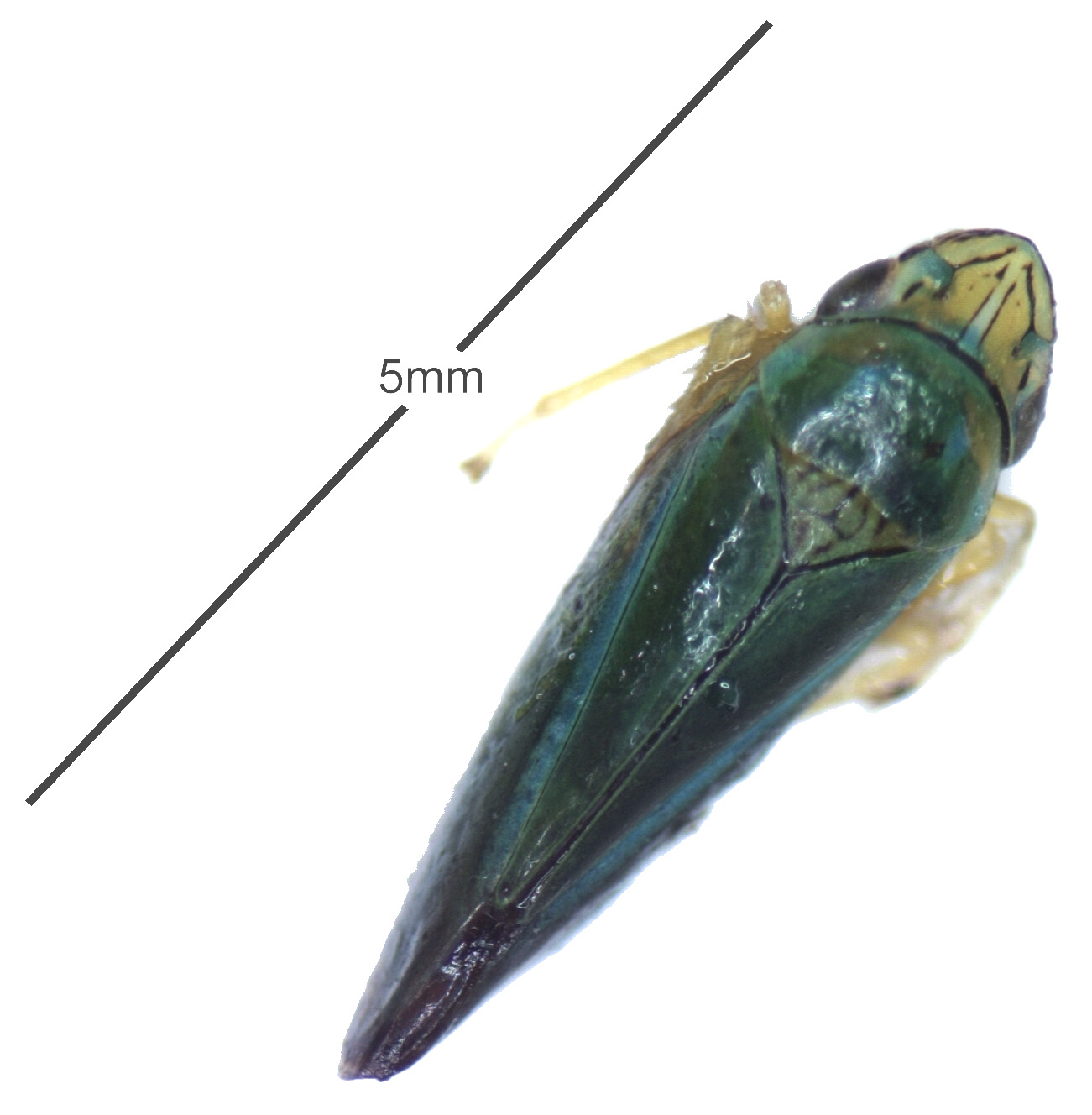 sharpshooter, adults measure 3/16 inch (5 mm) long and have green forewings with several black, tooth-like markings at the wing tips. A light blue stripe runs diagonally along each forewing and extends to the front of the head. This blue stripe is bordered on both sides by an orange stripe in some individuals. The top of the head is light brown to orange and has a light blue stripe along the midline.

Graphocephala coccinea – This species is called the 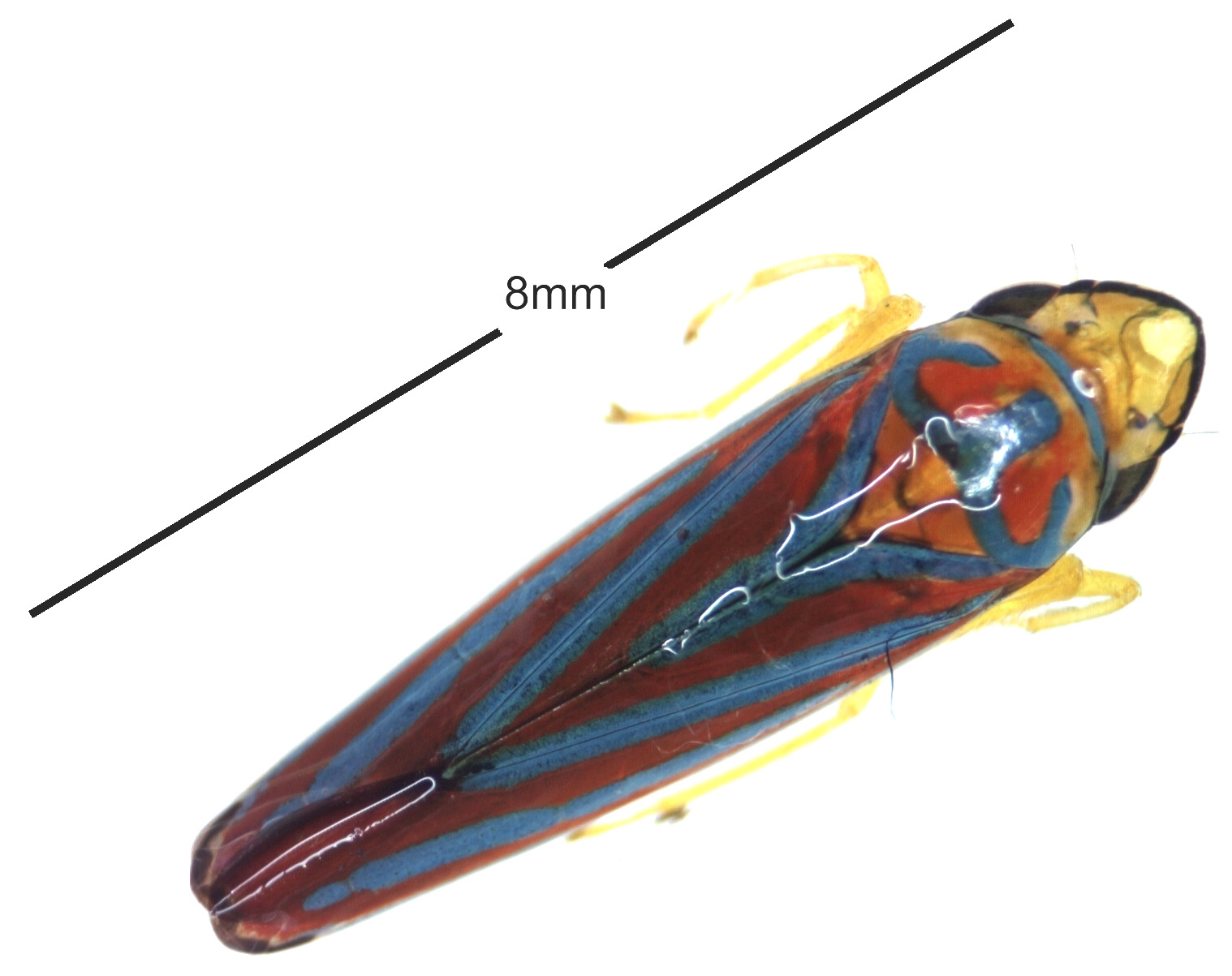 candy-striped leafhopper, red-banded leafhopper or red-and-blue leafhopper due to the prominent, alternating red and blue stripes present on the forewings and upper thorax (pronotum). Adults measure 3/8 inch (8 mm) long and have a yellow head with a black stripe running through the eyes along the margin of the head. The legs and abdomen are bright yellow. 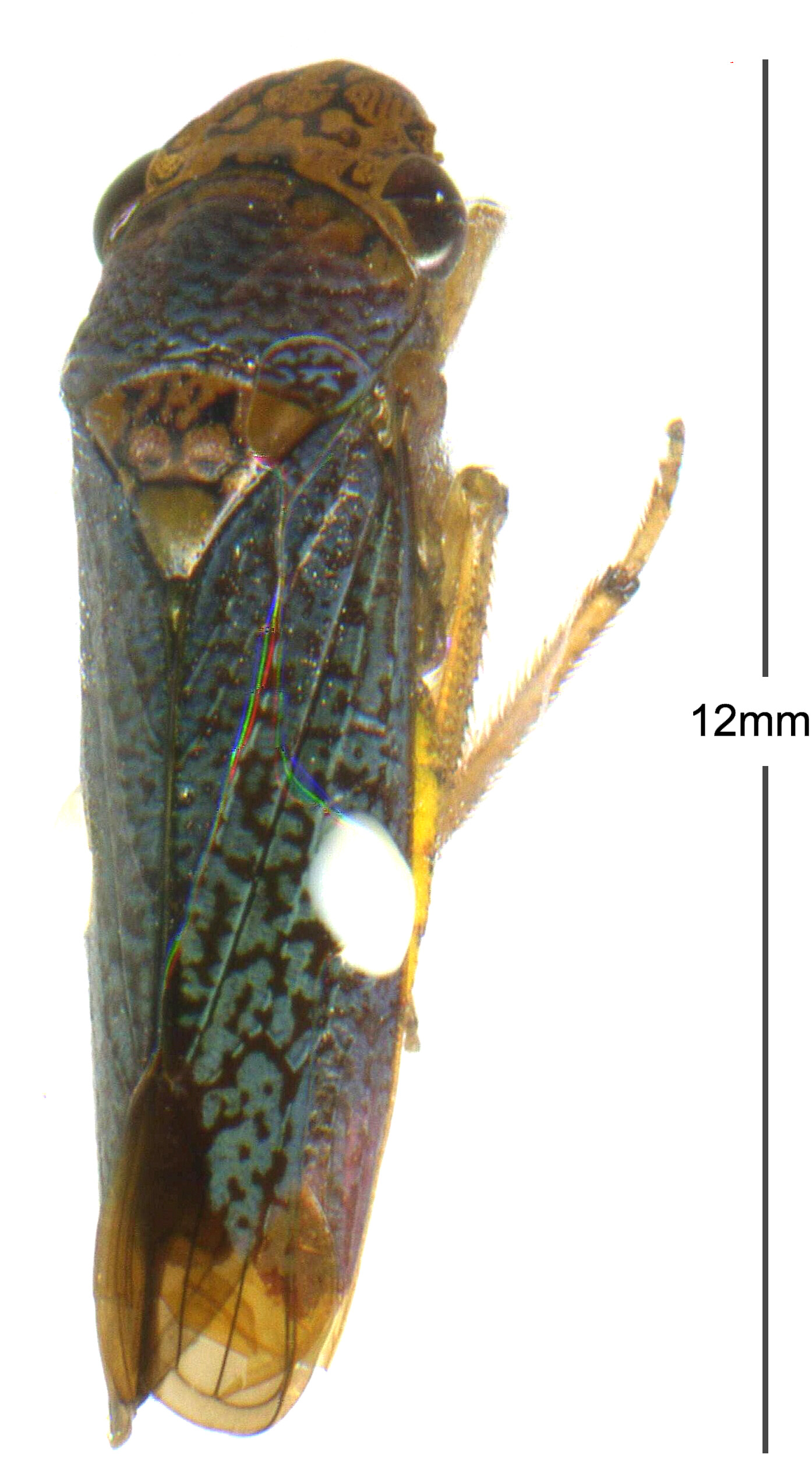 sharpshooter, presumably for its wide head. Adults measure 1/2 inch (12 mm) and have an orange head, eyes, legs and abdomen. The forewings and pronotum have light blue and black speckles. Occasionally, females have white patches called brochosomes on the sides of the forewings. Brochosomes contain proteins that females smear onto their eggs to prevent desiccation. 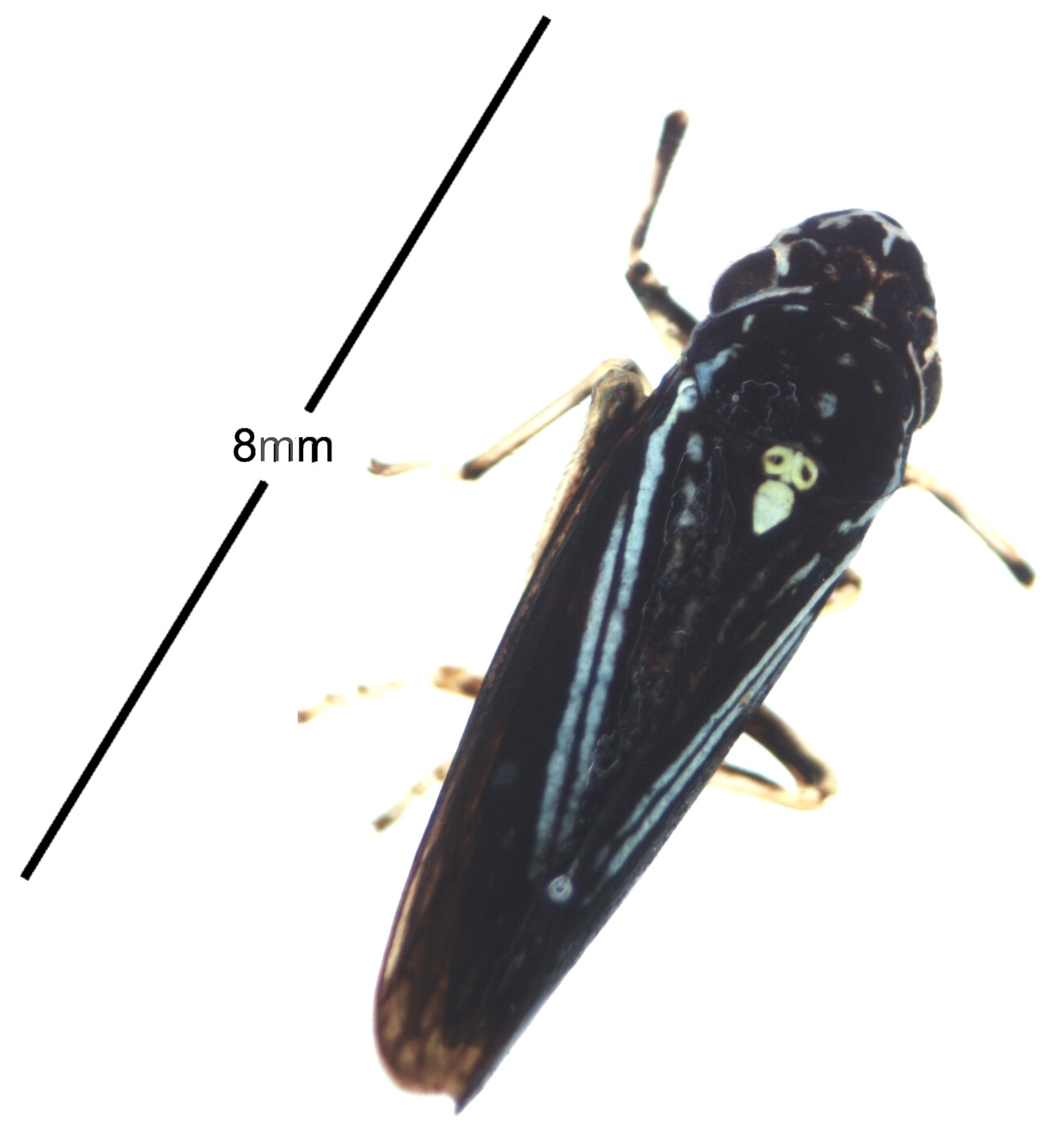 of this species measure 3/8 inch (8 mm) long with black and white (or light red) stripes running along the forewings and pronotum. The head is white to light red with black markings. 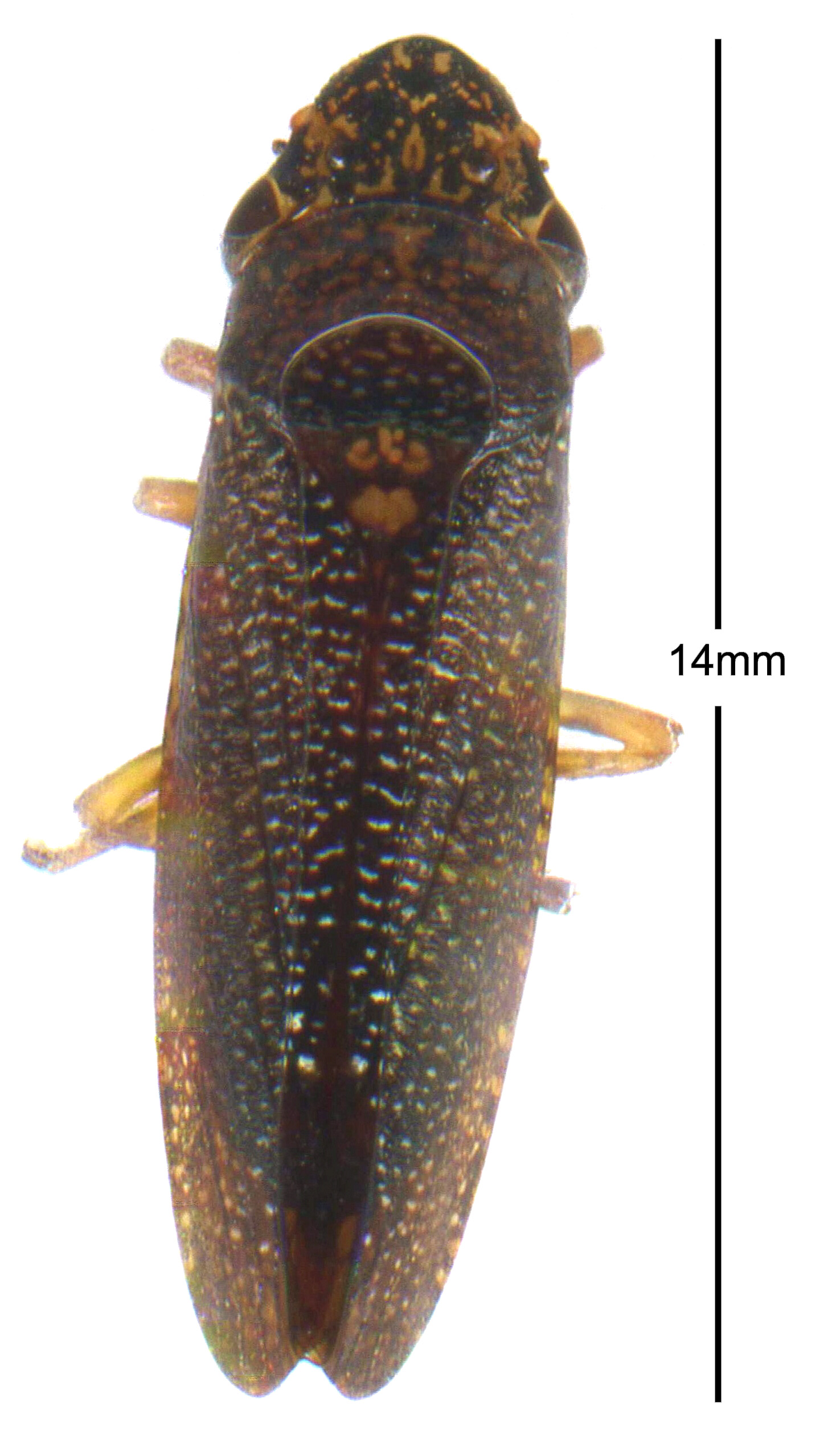 encountered in vineyards, with adults measuring 9/16 inch (14 mm) long. The common name, speckled sharpshooter, refers to the mottled appearance of the forewings and pronotum. The body and head are dark, with white to pale yellow markings scattered along the lateral margins. The front of the head may have parallel orange markings. 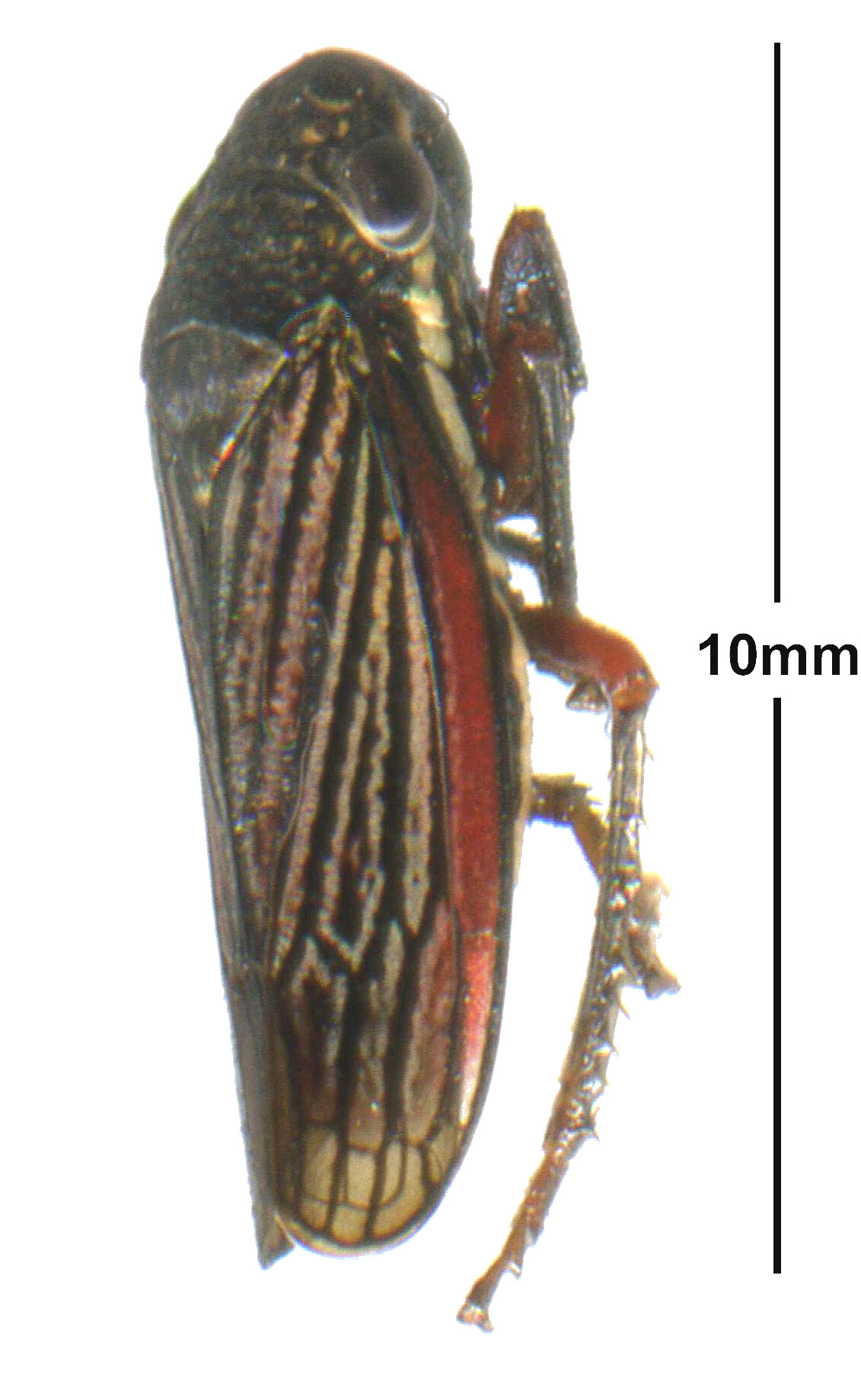 long. The forewings have narrow, alternating black and red stripes with a thicker red stripe along the wing margins. The head and pronotum are black with white markings and a white stripe extends from the front of the head, through the eyes, to the end of the abdomen. The legs are red and black.

Graphocephala versuta is common in the southern U.S., ranging from as far west as Texas, north to Illinois. It is active in Oklahoma vineyards from early June through late August with a distinct peak in abundance from late June through mid-July. Adults overwinter in woody habitats and move to herbaceous perennials in March. Females lay eggs on the lower leaf surface of ragweed, sunflower, okra and other species. This insect feeds on blackberry, grape, honeysuckle, privet, cherry and other deciduous trees. While this species occurs throughout most of the growing season, inoculative individuals (i.e., those capable of transmitting X. fastidiosa to susceptible plants) are not present until mid to late June. There appears to be one generation per year in Oklahoma.

Oncometopia orbona is distributed widely throughout the eastern U.S. from Florida to Maryland, and south from Missouri and Texas to northern Mexico. It is found in Oklahoma vineyards, but less frequently than G. versuta. This sharpshooter prefers feeding on sunflower, hollyhock, okra, lambsquarter, ash, oak, silktree, peach and crapemyrtle. Based on data extrapolated from Oklahoma tree nurseries where O. orbona is more abundant, this species is likely to be active in Oklahoma vineyards from late May through late August with a distinct peak in abundance in late July. There appears to be one generation per year in Oklahoma.

Graphocephala coccinea is distributed throughout North America, occurring from Ontario, Canada south to Florida and west to California and Mexico. This species is even less common than O. orbona in Oklahoma vineyards as it prefers to feed on blackberry, forsythia, pittosporum, rose, milkweed, goldenrod and other plants. Recent sampling efforts in Oklahoma vineyards yielded too few specimens to determine peaks in the abundance of this species; however, it was collected from late May through August, with most individuals captured in June.

Successful management of Pierce’s disease depends on effective control of potential insect vectors and eliminating weeds that may serve as sources of future infections. While all of the sharpshooter species described in this publication have potential to carry and transmit X. fastidiosa to grapevines, monitoring efforts should focus on the versute sharpshooter because of its high prevalence in Oklahoma vineyards and demonstrated ability to transmit X. fastidiosa to susceptible plants. Based on several years of sampling data from Oklahoma vineyards, monitoring for the versute sharpshooter should occur from early June through late August. The best monitoring tools for jumping and flying insects like sharpshooters are sticky cards. Sticky cards can be purchased online from garden and greenhouse supply companies. Purchase yellow sticky cards that measure approximately 3 inches by 5 inches and have adhesive on both sides. Sticky cards should be attached to the upper vine support cable using a clip or clothespin and spaced evenly around the perimeter of the vineyard and on diagonals through the vineyard center. For most Oklahoma vineyards, which are two acres or less, 12 to 16 sticky cards should be sufficient for monitoring versute sharpshooters. Sticky cards should be checked at least twice per week, and changed every two weeks. Due to the small size of these insects, use a hand lens with at least 15X magnification to identify specimens caught on sticky cards. If identification is in doubt, check with the local county Extension office for assistance.

Treatment thresholds are not established for the versute sharpshooter, so insecticides should be applied as soon as these insects are observed in the vineyard. Remember, it only takes one infective individual to spread X. fastidiosa throughout the vineyard. Table 1 lists products labeled for control of sharpshooters and other sucking pests in Oklahoma vineyards. Contact insecticides in Group 3A (i.e., pyrethroids) provide quick knockdown of target pests and can be used to control a broad spectrum of vineyard pests. However, these products should be used judiciously because they also kill beneficial arthropods such as lady beetles, lacewings and parasitic wasps. Pyrethroids also have short residual activity, so it may be necessary to reapply every 14 days to control severe infestations. Preventative insecticides in Group 4A (i.e., neonicotinoids) provide long-term control of sucking pests and protect the plant systemically. Some neonicotinoids are applied as a soil drench and taken up by the roots, while others are applied as a foliar spray and absorbed across the leaf membrane (i.e., translaminar and systemic activity). However, neonicotinoids should not be applied prophylactically because it is difficult to predict the severity of pest populations  from year to year. A recommended approach is to use a combination of curative and preventative insecticides applied as a tank mix or in succession. Thus, the contact insecticide provides rapid knockdown of the pest population, followed by season-long protection provided by the systemic insecticide. Always read the insecticide label to check for information about using the product safely and effectively.

† Restricted use pesticide; a pesticide applicators license is required to purchase and apply this product.

2 Re-entry interval; do not allow workers to enter treatment area of crop following application for the minimum amount of time indicated.

3 Pre-harvest interval; do not apply less than the number of days indicated prior to harvest.