How Weather Variables Affect Gamebirds in the Southern Great Plains

Climate of the Southern Great Plains

The Southern Great Plains (SGP) experiences highly variable weather ranging from extreme cold and heat to periodic flooding and long-lasting droughts. Portions of Oklahoma can experience more than 100 days per year with temperatures at or above 90 F (1). Additionally, rainfall is highly variable throughout the SGP. For example, annual rainfall in the Oklahoma Panhandle averages only 17 inches, while eastern regions of Oklahoma may average more than 59 inches per year(1). These extreme weather conditions can place stressful conditions on gamebirds, potentially affecting habitat use, survival, and reproduction. This fact sheet discusses how upland gamebirds in the SGP are affected by weather and describe some potential management practices that may ease these affects.

The northern bobwhite (hereafter, bobwhite) is a ground-nesting quail occurring throughout much of the eastern U.S. Bobwhites have experienced long-term declines primarily related to habitat loss, as well as changes in land use practices(2, 3). Beyond the long-term decline of bobwhite, they experience large annual fluctuations in numbers. These boom and bust cycles have been linked to weather patterns(4).

Bobwhites are also exposed to high temperatures during chick brooding. Bobwhite broods actively seek refuge sites that are up to 18 F cooler than exposed areas (13). Without seeking cover from sunlight, an adult bobwhite can die in less than two hours of exposure to temperatures greater than 111 F(14). However, a bobwhite chick can die within about two minutes of exposure to direct sunlight during high summer temperatures (8). Not surprisingly, during peak summer temperatures, when temperatures may reach more than 100 F, adult and chick activity is limited and restricted to refuge sites containing tall, woody cover, which provides shade from direct sunlight (5, 8, 13).

Knowledge on weather and winter behavior of bobwhites is limited. However, it appears that roost sites are at least partially selected based on temperature(15). Furthermore, coveys with multiple birds experience higher survival than single bobwhites when exposed to temperatures below 0 F with wind speeds more than 5 mph(16). By roosting in a group, individual bobwhites benefit from the warmth created by other bobwhite(17). 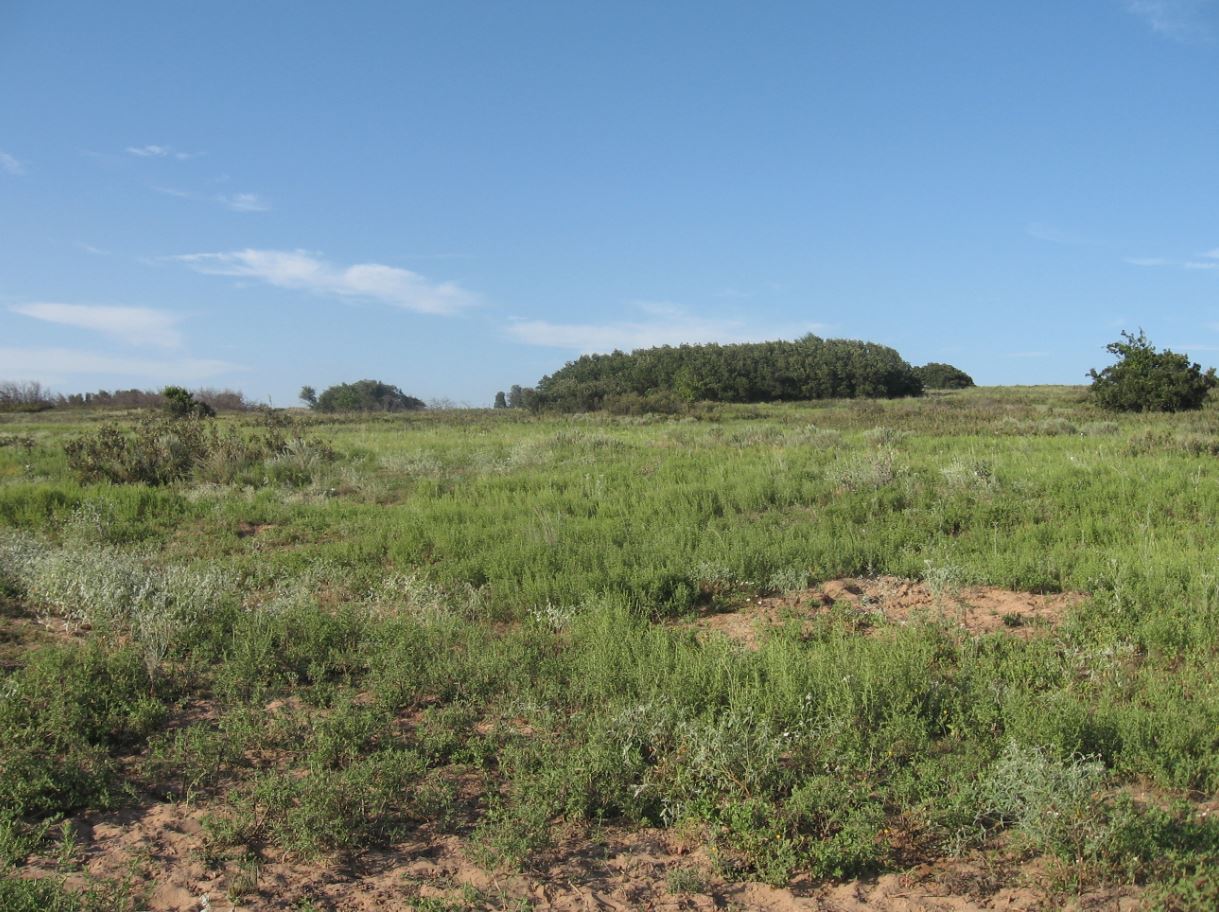 Management Implications:  Maintain shrub cover in areas prone to temperature extremes (18). Because quail require shrubs for thermal protection and escape from predators, managers should be cautious about herbicide use and brush management that limits necessary shrub cover (19). However, as quail require a variety of different vegetation cover and arrangements, practices such as prescribed fire, grazing, mechanical manipulation and herbicides can be used to create a patchy pattern of shrubs, grasses, forbs and bare ground (20, 22). Despite bobwhites sensitivity to heat and drought, there is no evidence that supplemental water affects quail survival or nest success, therefore is not a recommended practice (22). For more information about habitat management for the northern bobwhite, see NREM E-904.

The lesser prairie-chicken is a ground-nesting grouse found in portions of Kansas, Texas, Colorado, New Mexico and Oklahoma(23). The species has experienced up to a 97 percent decline in total population since the 1890s (23). Because lesser prairie-chickens require large areas of grassland or shrubland, habitat loss from land conversion and human development is the primary reason for their decline (24, 25, 26, 27).

Lesser prairie-chickens are sensitive to drought(28), and there is evidence that during droughts, lesser-prairie chicken reproduction decreases (29, 30). In addition to reducing food resources, drought can decrease grass cover, which limits refuge sites during high temperatures (30, 31, 32). During warm temperatures (79 F or more), lesser prairie-chicken broods select for cooler areas, while selecting for warmer areas during cooler temperatures (79 F or less)(33, 34). For example, during nesting and brooding, taller vegetation (18 inches or higher) is needed to conceal the nesting hen and chicks, as well as provide adequate cover during summer temperatures(23). Additionally, short woody vegetation such as shinnery oak provides important refuge in some areas that lesser prairie-chickens occur (34). 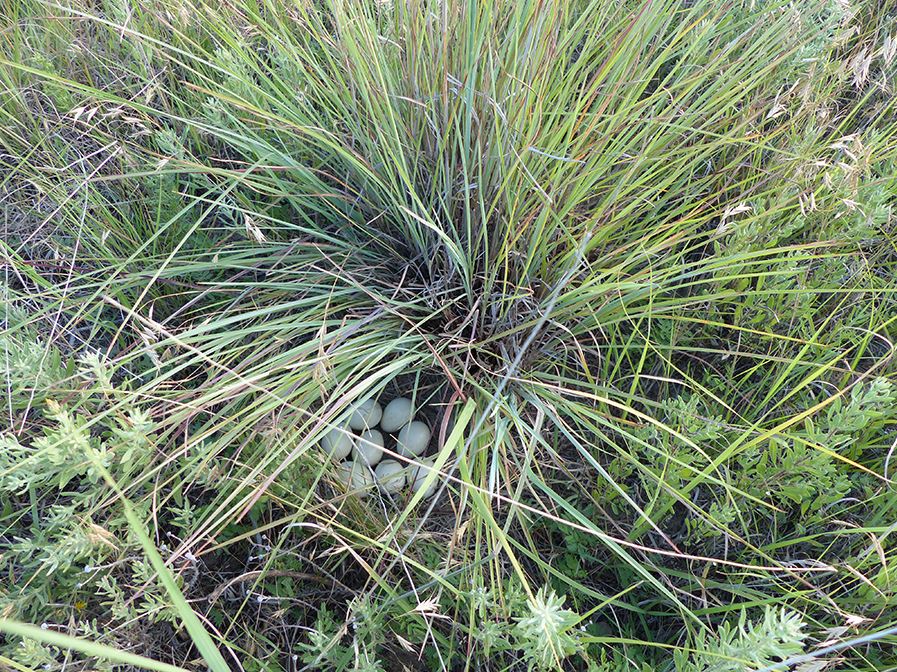 Figure 2. Overhead cover not only provides concealment from predation, but also minimizes the amount of sunlight and heat gamebirds experience. Notice the cover over this lesser prairie-chicken nest. (Photo credit Ashley Tanner). 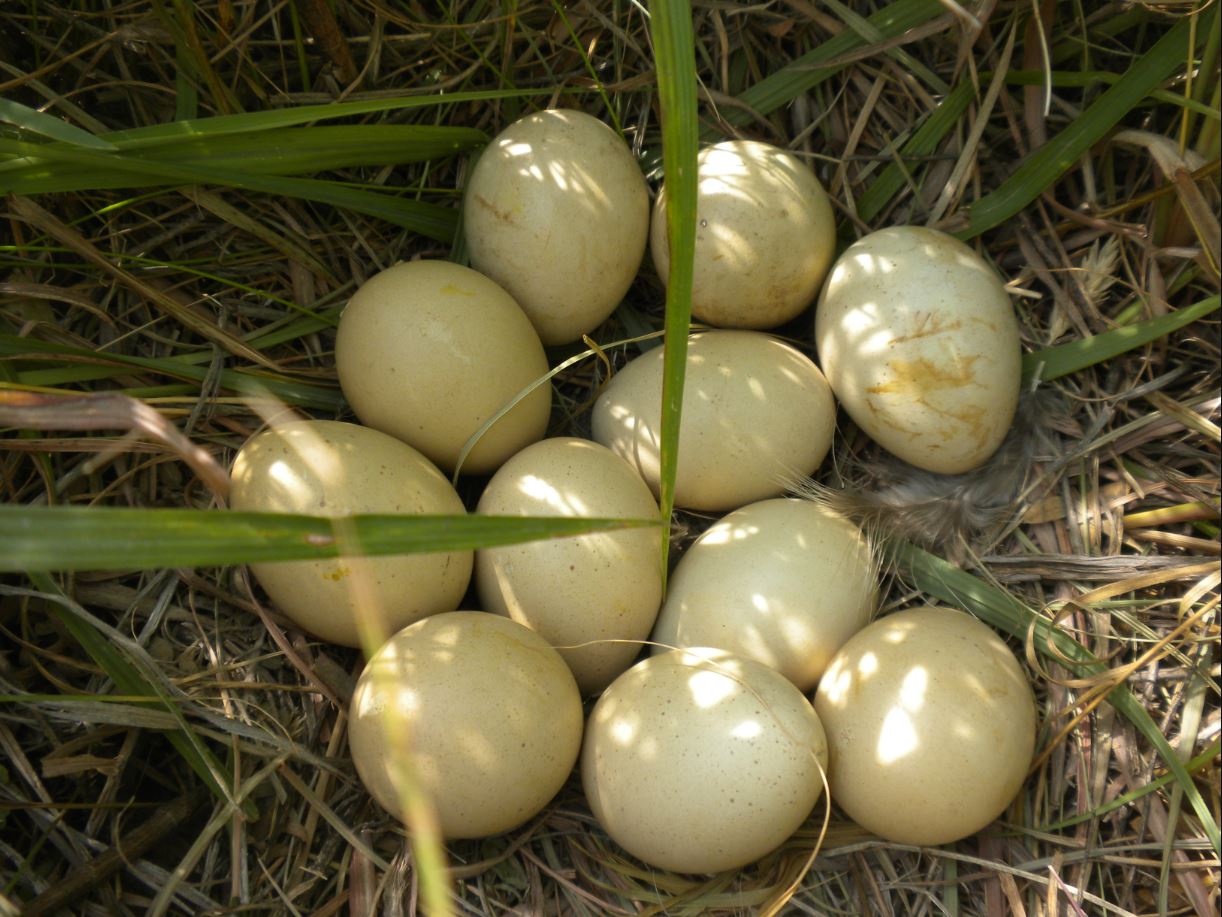 The wild turkey is a highly sought after gamebird across much of the U.S. Though once an uncommon bird, due to habitat loss and unregulated hunting, it is now abundant due to reintroduction efforts throughout most of the U.S. and improved habitat conditions. The two primary subspecies of wild turkey found in the SGP are the eastern wild turkey and the Rio Grande wild turkey.

While very little research has examined the effects of weather on wild turkey, weather appears to influence reproduction(41). For example, a decrease in nest success and poult survival has been associated with exposure to cold, wet weather (41, 42).

Specifically, poult death from exposure appears to be related to the age of poults, storm intensity and the minimum temperature (42, 43). For eastern wild turkey, research indicates an increase in poult death as the number of days with rainfall of 1 inch or more increases during the early summer (44). However, Rio Grande wild turkey populations have been shown to have a positive relationship with summer precipitation (45), likely due to the drier areas where this subspecies lives. Little direct information is available on how heat influences wild turkey, but it has been suggested that high air temperature decreases wild male turkey activity, causing them to loaf in shaded areas (46). 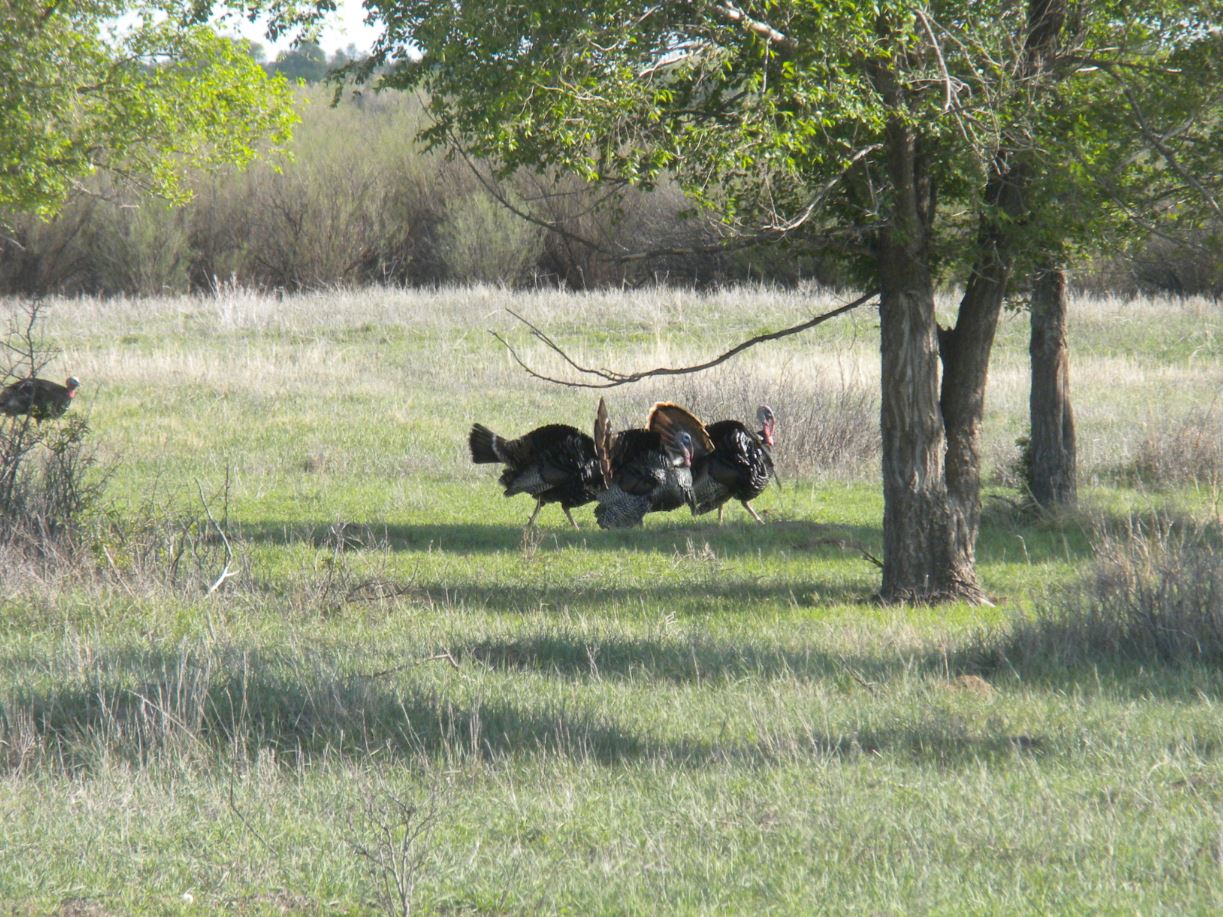 Management Implications: With limited knowledge on how weather interacts with wild turkey populations, management implications are restricted. It is known that domestic turkeys overheat at air temperatures 90 F or more (47). Note that this is a lower threshold for temperature stress than has been determined for other ground-nesting birds, such as bobwhite, whose threshold is 102 F. This makes the management of thermal refuge sites potentially even more critical for wild turkeys than for bobwhite. Similar to habitat requirements for bobwhite, thermal refuge sites are likely to also be composed of tall, woody vegetation to provide shade from sunlight, but vegetation may need to be taller to accommodate the large body size of wild turkey.

The climate of the SGP is characterized by tremendous variation. Droughts, floods, blizzards, heat waves and hail all are potential hazards for wildlife in the region. Ground-nesting gamebirds such as quail, prairie-chicken and wild turkey have various strategies to deal with such weather variability.  These gamebirds often use taller vegetation cover to help mitigate weather extremes. Therefore, the prudent manager should carefully consider how management actions such as mowing, grazing, prescribed fire and herbicides will affect the ability of the land to provide adequate cover throughout the year, given weather variability. For further information about the ecology and management of the species listed in this fact sheet, see the habitat guides and citations listed in the references.

Helpful tips on how to keep your pond in good condition according to the month.

Learn about some of the different kinds of evergreen trees that grow well in Oklahoma and how to select the right kind for your landscaping needs.