Hessian fly is believed to have been introduced into the U.S. from straw bedding used by Hessian troops during the Revolutionary War in New York.  It has been present in Oklahoma since the late 1800s, and was a frequent and widespread pest in wheat from 1900 through about 1970. Thereafter, its pest status diminished.

Since 2004, Hessian fly outbreaks have become more common and severe local infestations are documented in Oklahoma every year. The combination of reduced tillage, continuous wheat production, early sowing and planting Hessian fly-susceptible winter wheat varieties has probably contributed to greater occurrence of Hessian fly.  Hessian fly is not easily controlled with seed treatments or rescue insecticide applications, so management should focus on preventive practices to reduce its survival and reproduction.

The adult Hessian fly is a tiny gnat-like fly, measuring one-eighth inch long.
Hessian fly eggs are oblong, orange, measure less than 1/50 inch and can be mistaken for early signs of leaf rust.

Second instar larvae form a rice-like, shiny, dark brown puparia commonly referred to as a “flaxseeds.”  They molt into a 3rd instar larvae, which then pupate within the puparia. This represents the overwintering and oversummering life stages. 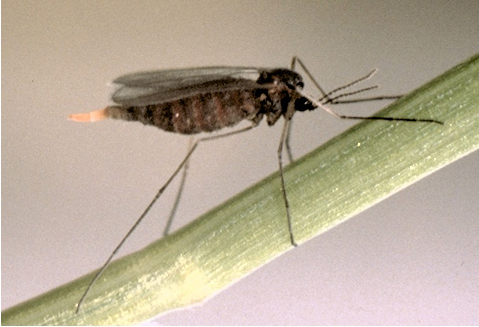 Hessian fly completes its lifecycle in about 40 days to 50 days, but once the “flaxseed” stage is reached, it may remain dormant for three months to four months. After emergence and mating, the female fly lays eggs in between the leaf margins of its host plant. Newly hatched larvae crawl down the plant and begin feeding in the area between the sheath and stem just above the crown, just below the soil surface (fall) or between the stem and leaf sheath at the first node above the soil surface (spring). The fall generation overwinters as flaxseed, emerging in spring; the spring generation oversummers as flaxseed in wheat stubble, emerging in the fall.

Oklahoma experiences two to three generations per crop season, but two major generations occur—one in the fall, and one in the spring. Flushes of emerged Hessian flies may occur during the winter or spring when temperatures exceed 45 F to 50 F for an extended time. A recent study followed the emergence patterns of Hessian fly for two growing seasons using pheromone traps and showed the fall generation adults emerged from mid-October through early December and spring generation adults emerged from March through May.

Figure 2. Hessian fly eggs are laid on the upper side of a wheat leaf between the veins. Note the orange color of the eggs are similar in color to leaf rust. Photo courtesy of the University of Nebraska.

Hessian fly is known to feed on barley, rye and triticale, but its preferred host is wheat. Hessian fly does not attack oat but will feed on several wild grasses (quackgrass, western wheatgrass, little barley, goatgrass and timothy).

Hessian fly larvae injure the wheat by feeding on stem tissue at the crown of young plants or just above the nodes of jointed wheat. As they feed, they inhibit growth of the plant. During a fall infestation, young infested plants become dark green to bluish-green and are stunted with thickened leaves. Individual infested tillers eventually die. Some varieties of wheat may compensate by producing secondary tillers, but others fail to produce any secondary tillers after being infested. Often, fall-infested wheat becomes less winter hardy and dies.

During the spring, Hessian flies emerge around the time jointing begins. Larvae feed just above the node between the leaf sheath and stem. Feeding inhibits stem elongation and the plant’s ability to transport nutrients to the developing wheat head, resulting in poor grain fill and/or stem breakage at the weakened feeding area. Significant lodging can occur and an infested field is often mistaken to have suffered hail damage. In such fields, careful inspection of lodged plants will reveal Hessian fly flaxseeds that are inserted at the first joint of the stem just under the leaf sheath.

Figure 3. The second instar larvae of the Hessian fly can be found by splitting open stems in late winter. Note the whitish/green color of the larvae at this stage. Photo courtesy of Jeff Edwards and Tom Royer, Oklahoma State University.

Fields exhibiting poor growth should be checked for signs and symptoms beginning in early October through November. Infestations may be heavier along field margins. Pay particular attention to the presence of volunteer wheat in field margins or ditches. Plants will be stunted with thickened leaves and are often darker green compared to uninfested plants. Pull up plants and look for dead or dying tillers. Peel back leaves to their point of attachment to the stem and look for flaxseeds. In spring, damage is best assessed as the wheat matures. Look for broken stems above the first node and check stems for flaxseed. Yield loss can be estimated by counting infested plants or number of flaxseeds per tiller. A field averaging 10 percent infested plants may suffer one bushel of yield loss. Based on studies in Oklahoma, an average count of one flaxseed per tiller will result in a 5 bu/A yield loss on susceptible varieties.

There are several natural enemies of Hessian fly, but little information is known about their biology, distribution or effectiveness in Oklahoma. A survey conducted in Idaho identified seven species of parasitoids that attacked Hessian fly, but none occurred in large numbers. A recent Oklahoma survey revealed only one species, which was found in low numbers. Because so little is known about these natural enemies, they cannot effectively be utilized as a management component.

Since Hessian fly passes the summer as a flaxseed in the stubble, incorporation of wheat stubble into the soil to a depth of 4 inches can reduce Hessian fly survival by nearly 100 percent.

Research suggests some flaxseeds residing above the soil surface can be destroyed by burning or intensive grazing, but those that lay at the surface in the crown or below the soil surface typically survive burning or grazing. It is also important to consider that valuable crop nutrients such as phosphorus and nitrogen contained in wheat residue will likely be lost as a result of burning.

Volunteer wheat can be a source of Hessian fly infestations even in clean-tilled fields because they provide an extra brood that emerges from the volunteer wheat, infesting a field after new plants have emerged. Therefore, volunteer wheat should be destroyed at least two weeks before the planted field emerges. This practice will also reduce the incidence and severity of some wheat virus diseases such as Wheat streak mosaic, High Plains and Triticum mosaic disease. For more information on High Plains Virus, refer to OSU Facts EPP 7328 Wheat Streak Mosaic, High Plains Disease and Triticum Mosaic: Three Virus Diseases of Wheat in Oklahoma

Continuous wheat production serves as a constant food source for Hessian fly. Since it is the preferred food host, and can’t survive on other crops such as corn, sorghum, soybean or canola, non-host crops should be rotated with wheat where feasible. Crop rotation will not only reduce the likelihood of Hessian fly, but will also reduce the incidence and severity of several wheat diseases and improve wheat yield in many cases. For more information on the benefits of crop rotation, refer to Extension Fact Sheet PSS-2132 No-till wheat production in Oklahoma.

In many areas in the U.S., a “fly free” planting date has been identified to help wheat producers manage Hessian fly. A field planted after the fly free date is less likely to become infested. Unfortunately, the fly free planting date is not effective in Oklahoma because we experience extended emergence of flies in the fall and spring. For dual purpose wheat, it is impractical to delay planting long enough without suffering significant forage availability for grazing stocker cattle. For grain production, October–sown wheat is at lower risk for a fall infestation and generally produces higher grain yields than September-sown wheat. Wheat planted extremely late (November/December) is more vulnerable to attack by the spring brood of Hessian fly, and other pests such as Russian wheat aphid.

Various biotypes of Hessian fly have been identified, based upon their ability to overcome specific known resistance genes present in wheat. The wheat breeding program at OSU screens breeding lines and varieties for resistance to field populations of Hessian fly. Presently, there are a few Hessian fly-resistant varieties that are well adapted to Oklahoma growing conditions. Resistant varieties are very effective management tools and yield well when fly pressure is high, but also have been effectively used to reduce local Hessian fly populations. For more information on which varieties are resistant to Hessian fly, refer to OSU Facts PSS-2142 Wheat variety comparison chart, which is updated annually.

Wheat seed can be treated with imidacloprid or thiamethoxam insecticide; however, seed treatments probably last 20 days to 30 days after germination, while Hessian fly may infest wheat well beyond that time. Recent evaluations of insecticide seed treatments have shown they are generally not effective in reducing fall infestations for the same reasons that the fly free planting date is not effective. There is no effective insecticide control for spring infestations.