Leaf spot diseases are caused by two distinct, but closely related, fungal plant pathogens. Early leaf spot is the most common foliar disease of peanuts in Oklahoma, while late leaf spot occurs infrequently. The disease cycles of early and late leaf spots and the type of damage caused by the two diseases are similar. Late leaf spot often, but not always, occurs later in the growing season and is generally more aggressive and difficult to control than early leaf spot. Leaf spot diseases are most severe where peanuts are grown in the same field in consecutive years, and when periods of wet weather from rain, dew or high humidity are frequent. Yield loss occurs from the shedding or defoliation of diseased leaflets. Defoliation reduces healthy leaf area and weakens the stems and pegs causing pods to fall off the vine during digging and harvest. Yield loss becomes apparent when defoliation levels exceed 50 percent. Yield losses of 50 percent or more are possible when leaf spot is not controlled and nearly complete defoliation occurs. Therefore, adequate control of leaf spot is essential in the production of a high-yielding peanut crop.

The fungal pathogens attack any above-ground portion of the plant, but leaf spots are the most conspicuous symptom. Depending upon weather conditions and cropping history, leaf symptoms usually appear between 30 to 50 days after planting. Symptoms of both early and late leaf spot first appear as brown or black, pinpoint-size dots on the upper leaf surface. Early leaf spot lesions enlarge to become brown to dark brown, circular spots with a distinct yellow border or halo (Figure 1). Late leaf spots typically appear as black, circular spots lacking or with a less pronounced yellow halo (Figure 2). Both early and late leaf spots reach a size of about one-fourth of an inch in diameter. 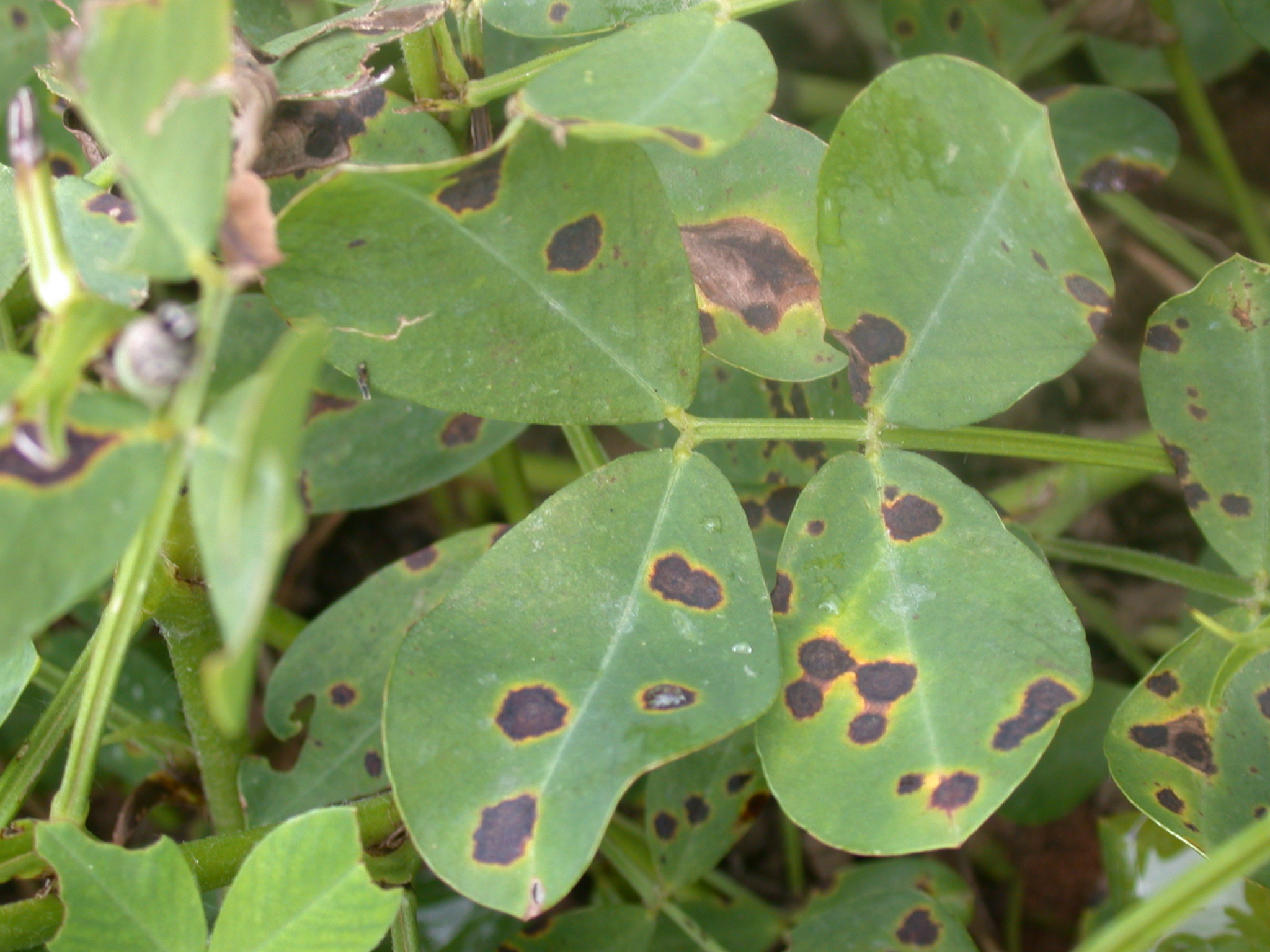 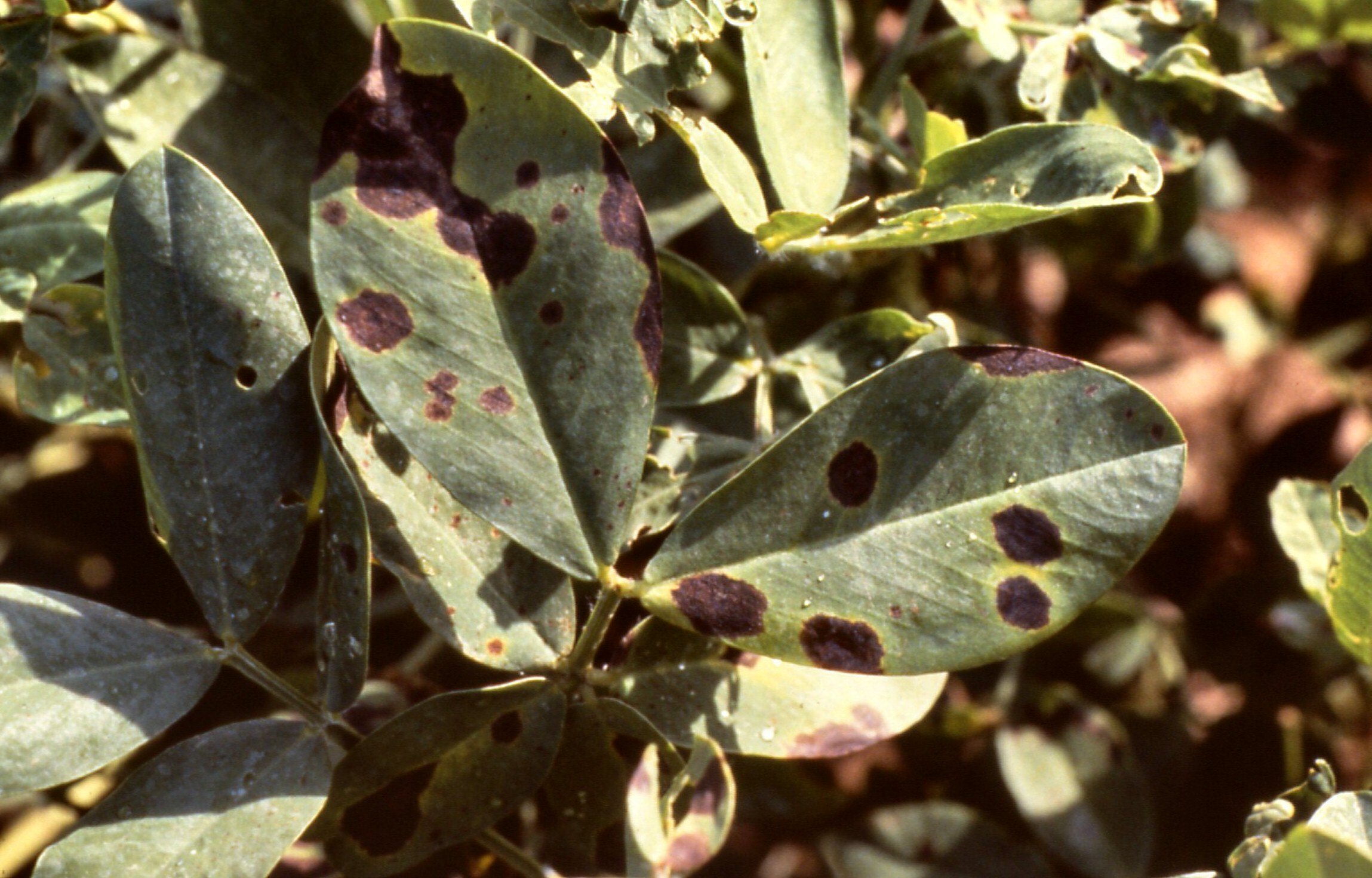 Figure 2. Symptoms of late leaf spot on the upper leaf surface are circular, dark brown to black spots surrounded by a faint yellow halo or without a halo. 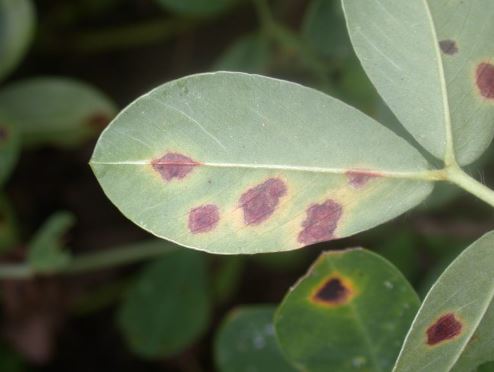 Figure 3. Early leaf spots on the lower leaf surface are smooth in texture (no sporulation) and brown in color. 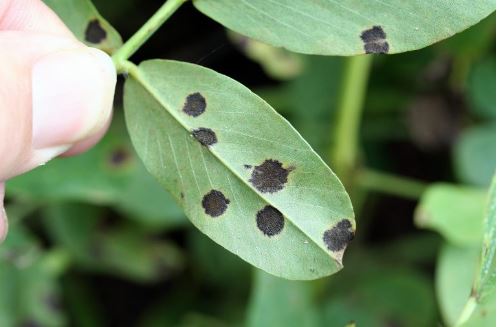 Figure 4. Late leaf spots on the lower leaf surface are typically black in color and may be rough in texture when spores are being produced. Note the abundant moldy tufts of sporulation. (Photo courtesy of Austin Hagan, Auburn University) 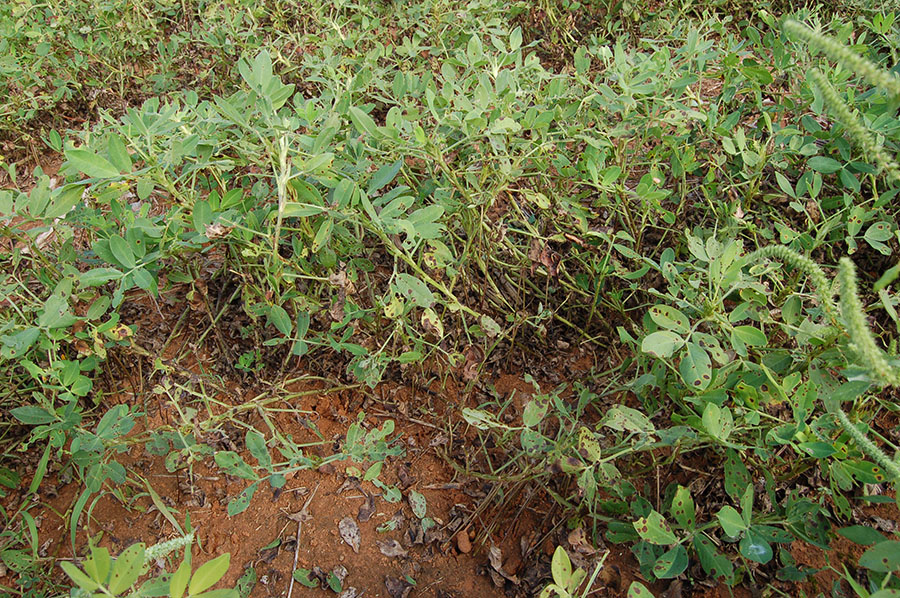 The fungal pathogens that cause early and late leaf spots reproduce and infect plants by means of microscopic spores. Both fungi are capable of producing tremendous numbers of spores on infected plant parts. Spore production is favored by high humidity. The source of the spores that cause the earliest infections of the growing season (primary inoculum) are produced on infested peanut residue in the soil. Visible spots develop about 10 to 14 days after infection, and new spores are produced in mature spots shortly thereafter. The new spores produced in spots on infected leaves (secondary inoculum) serve to infect new leaves. Spores are spread by wind, splashing rain and insects. Leaf spot can increase rapidly under favorable conditions, as several secondary cycles may occur per season. Abundant peanut residue in fields where peanuts are cropped continuously often result in early and rapid development of leaf spot.

Control of leaf spot is essential to prevent heavy defoliation and yield loss. An integrated management program that uses cultural practices, genetic resistance and a fungicide program is suggested. Cultural practices will give partial control of leaf spot. Rotation of peanuts with other crops and management of peanut residue by tillage, help delay the onset of disease and slow leaf spot development. These practices reduce the level of primary inoculum in the field. Peanut varieties differ in reaction to leaf spot, but levels of resistance in peanut varieties alone are not sufficient to provide adequate disease control. Spanish varieties are most susceptible, Virginia types are intermediate and runner varieties are partially resistant. Proper irrigation will also help reduce leaf spot. Application of an adequate amount of water, rather than frequent irrigation with small amounts, will help maintain a drier canopy and soil surface between irrigations.

In addition to cultural controls, a fungicide program is normally required to prevent yield loss from leaf spot. Several fungicides are available that provide excellent leaf spot control when applied on a recommended schedule. Some fungicides that control foliar diseases also control soilborne diseases such as southern blight, limb rot and Sclerotinia blight. Because fungicides act to protect healthy leaves and plants from infection, they must be applied preventively. The goal of the spray program should be to minimize defoliation at harvest. Recommended application schedules include a 14-day schedule and programs that base applications on weather conditions (MESONET Early Leaf Spot Advisory and AuPnuts programs). The number of applications and cost of fungicide programs vary depending upon the variety, cultural practices and application schedule used, the need for soilborne disease control and the level of control desired. Some fungicides are prone to resistance problems when they are used exclusively over a period of time. Fungicides with different modes of action can be applied in alternation, in a tank mix, or in a pre-mix to deter the development and build-up of resistance. Consult the Peanut Production Guide for Oklahoma (Circular E-806) and your county extension agent for current recommendations regarding recommended fungicides, applications schedules and resistance management strategies.

Web blotch is another important foliar disease of peanuts caused by a fungus. It occurs less frequently than leaf spot, but it can cause severe defoliation and yield loss when and where it occurs. The disease is most severe on Spanish and Virginia varieties while runner types are moderately resistant and rarely damaged.

Web blotch symptoms appear first on the upper leaf surface. Symptoms appear as roughly circular, tan to dark brown blotches or net-like spots with irregular and light brown margins. The net-like webbing, often visible, is the growth of fungal strands just beneath the leaf surface.  Blotches reach a size of one-half of an inch or more in diameter (Figure 6), larger than those caused by leaf spot. Blotches are less distinct and pale brown on the lower leaf surface. The regular border and bright yellow halo surrounding early leaf spot lesions are conspicuously absent with web blotch. Affected leaflets dry and become brittle, and fall from the plant. Complete defoliation and up to 50 percent yield loss may occur on Spanish varieties where the disease is severe and not controlled. 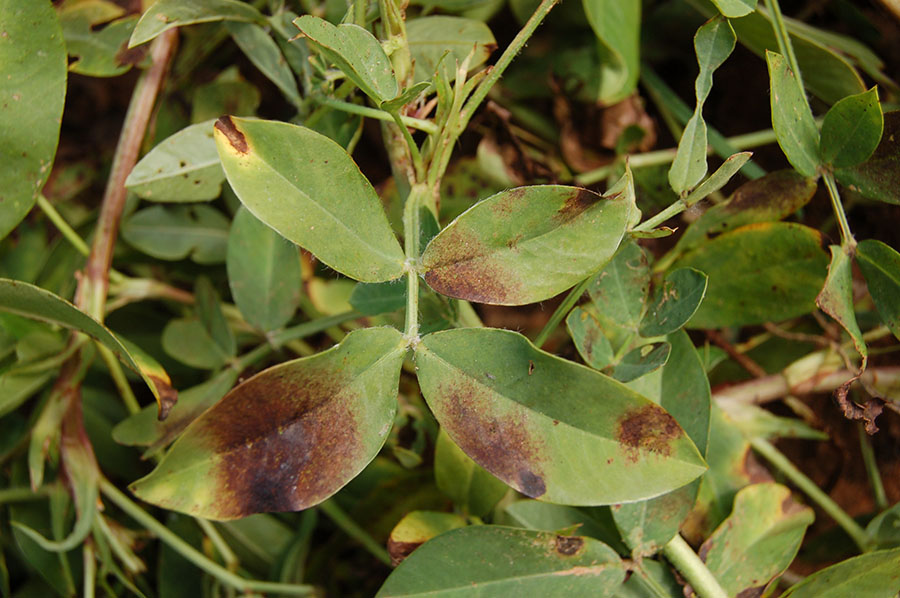 The disease cycle of web blotch is not well defined. The web blotch fungus survives between peanut crops on infested crop residue in the soil. Web blotch is favored by cool (60 F to 70 F) wet weather and typically becomes a problem in the fall, when harvest is delayed by rainy weather. The disease requires longer periods of leaf wetness and can infect peanuts at lower temperatures than the fungus causing early leaf spot.

Crop rotation and residue management practices recommended for management of leaf spot diseases should also help reduce web blotch. Because runner varieties are moderately resistant to web blotch, levels of web blotch rarely reach damaging levels and fungicide programs for leaf spot generally provide adequate control of web blotch. On Spanish and Virginia varieties, adjustments to fungicide programs may be necessary to achieve adequate control, particularly when web blotch pressure is severe. When web blotch appears on Spanish and Virginia varieties, a strict 14-day schedule with a fungicide that has good web blotch activity should be maintained until harvest. Consult your county Extension agent and the Peanut Production Guide (Circular E-806) for the latest recommendations for chemical control of web blotch.

Pepper spot is a minor foliar disease of peanuts and does not appear to cause significant yield loss. However, it occurs on susceptible varieties, particularly in years when leaf spot is not severe. Levels of defoliation typically do not exceed about 30 percent on the most susceptible varieties.

Symptoms appear as pin-point sized, dark brown to black spots. Spots become numerous, may enlarge to one-eighth of an inch in diameter and appear sunken (Figure 7). Spots initially are only clearly defined on one of either the upper or lower leaf surfaces, but becomes more distinct on both leaf sides with age. Severely affected leaves turn yellow, dry up and fall to the ground. Black, sunken, greasy spots appear on leaf petioles and stems of affected plants (Figure 7). 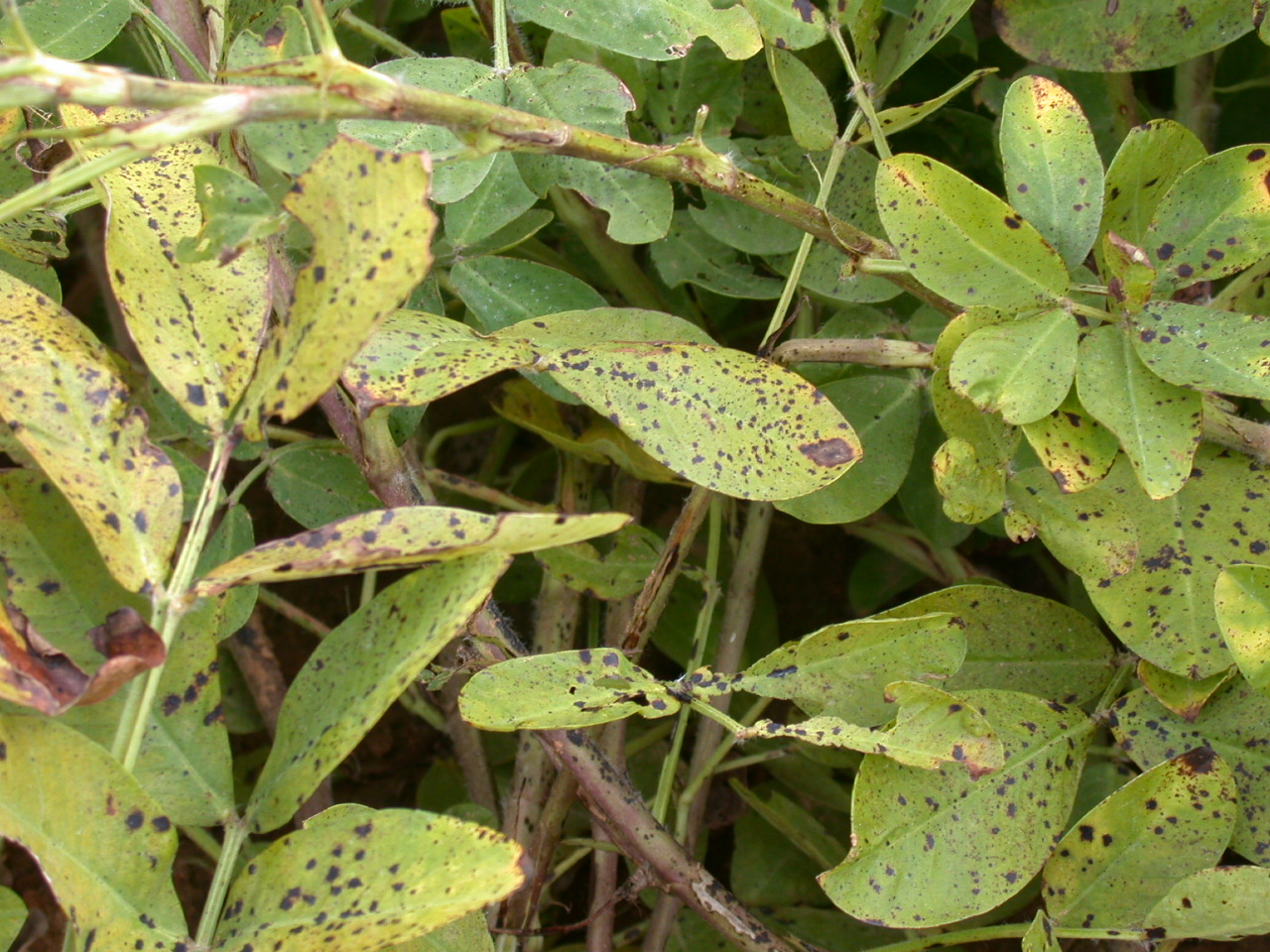 The pepper spot fungus survives between peanut crops on infested crop residue in the soil. Spores of the fungus are released into the air during the end of dew periods and the beginning of rainy periods. Conditions favoring leaf infection are not well defined.