Common Diseases of Stone Fruit Trees and Their Control

Trees that bear fruit with a hard woody pit, or “stone,” are commonly called “stone fruit” trees. Peaches, plums, apricots, nectarines, almonds, and cherries are in this group. Of the stone fruits, only peaches and nectarines are grown commercially in Oklahoma. However, many homeowners have at least one stone fruit tree in their yard. A number of serious fungal, bacterial, nematode, and viral diseases are common to stone fruits and should be of concern to all growers. Symptoms of several common diseases and their control measures are discussed.

The first evidence of fruit infection is the appearance of a small brown spot, frequently originating in a slight wound caused by insect feeding or egg-laying activities. The rotted area rapidly expands and eventually becomes covered with tan-gray fungal fruiting tufts (Figure 1). The tufts appear sooner on plum and cherry fruits than on peach fruit. Fruit rotted by brown rot usually retain their form and usually remain attached to the tree for some time after being completely rotted. Later they may fall. Whether they fall or are retained in the trees, they dry into firm black fungal mummies which do not disintegrate. In the following spring, spores are produced on the mummies. These spores initiate a new infection cycle. When the flowers or fruit are infected, the fungus may also infect twigs, causing cankers or twig death. The fungus may also grow down infected twigs and cause branch cankers. During rainy weather, gummosis is common on infected twigs and cankers. Fungal tufts may also appear.

To control brown rot, several practices are required: 1) sanitation and orchard management, 2) adherence to a recommended fungicide spray schedule, and 3) good harvesting practices. These practices are discussed below.

1. Sanitation and Orchard Management. Removal of mummified fruits from trees, and also from the ground, and their destruction is very important. However, brown rot cannot be controlled by this practice alone. Proper pruning also aids in control by improving good air circulation. This promotes rapid drying of foliage and soil. It also reduces the chance of twig punctures of the fruit. Thinning of crowded fruit is a good cultural practice that also reduces brown rot infection through prevention of fruit contact. During the later part of the season, prompt removal of damaged and infected fruit is quite important in preventing additional fruit infection, as well as preventing twig and branch infection.

2. Adherence to a Recommended Spray Schedule. No method of control has been developed which is as effective as adherence to a recommended fungicide spray schedule. There are several commercially available fungicide formulations that are effective for use in a brown rot control program for Oklahoma. These are presented in Current Report CR-6240, “Commercial Peach-Nectarine Disease and Insect Control.” Homeowners may want to follow the recommendations presented in OSU Extension Fact Sheet EPP-7319. “Home Tree Fruit Production and Pest Management.”

3. Good Harvesting Practices. Brown rot causes greater losses during shipment to market and at the market than in the orchard. Most of the loss is a result of poor harvesting practices. Wounds of any type or size produced on fruit during harvest are ideal sites for infection because mature fruits are very susceptible. 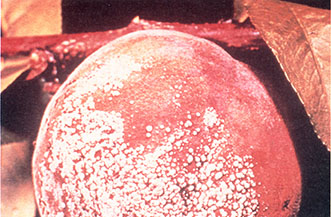 Leaf curl, caused by the fungus Taphrina deformans, is a serious disease of peaches and nectarines in Oklahoma. Apricots are immune. Leaf curl is usually confined to the current year’s blossoms, leaves, twigs, and fruit. The disease rarely extends down to growth produced the previous season. In the spring, infected leaves emerging from buds are thickened, and as they develop, the leaf blades become puffed and folded with the edges curling inward so that their undersurfaces become a series of concaved chambers (Figure 2). Later, diseased leaves become yellowish, and spores are produced on the upper surface. Soon the leaves turn yellowish-red to brown, and later they wither and fall from the trees during hot, dry weather. Dropped leaves are replaced by new leaves which emerge from dormant buds. On infected twigs, leaf curl causes a slight swelling and the twigs will remain small. Sometimes fruit will become infected, showing shiny, raised, warty areas (Figure 3). Infection is promoted by cool, wet weather during early spring.

Leaf curl can be economically and effectively prevented by one application of a recommended fungicide before leaf bud swell during the spring. Prolonged periods of cold, rainy weather in the spring retard tree growth more than growth of the fungus, thus extending the infection period. For additional details and current spray recommendations, read Current Report CR-6240, “Commercial Peach-Nectarine Disease and Insect Control.” 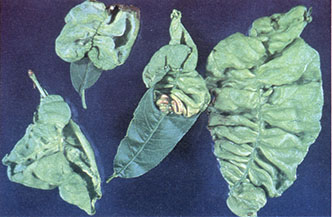 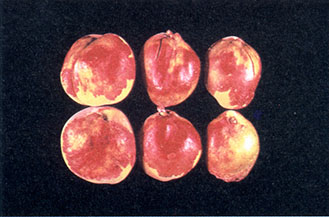 Scab (sometimes called “black spot” or “freckles”) of peaches, cherries, plum, and apricot is caused by the fungus Cladosporium carpophilum. The main loss is from the unsightly appearance of scab lesions on fruit (Figure 4) which reduces marketability. General use of fungicides by commercial growers has relegated scab to a minor status in most commercial orchards. When the disease is not controlled, large areas of the fruit will show lesions, exposing the pulp to many fungi which cause fruit rots. Twigs and leaves may also be infected, but fruit infection is more common and more serious. Recommendations for control are found in publications listed at the end of the leaf curl section. 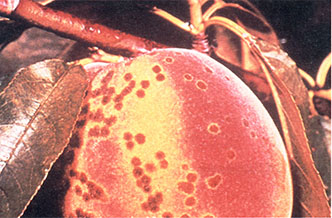 Figure 4. Symptoms of scab fungus infection of a peach fruit.

Two mushroom root rots of stone fruit trees have been reported in Oklahoma. These diseases are uncommon, but growers should be aware of them. The most common one is Clitocybe root rot, caused by the fungus Clitocybe tabescens. The other root rot is caused by Armillaria mellea.

Clitocybe root rot disease has caused extensive losses in the peach areas of the southeastern states. The disease is uncommon in Oklahoma, but it does have a potential to become a disease of some consequence. Armillaria root rot has also been reported in Oklahoma. These root rots are most common where old orchards have been replanted or planted on new land cleared of forest trees, particularly oaks. Symptoms of the two root rots are identical and may be confused with winter injury or water logging. First, infected trees present a weakened appearance, with small, yellowish leaves over the entire tree or at least on one or two major branches. At the end of the season, some branches or the entire tree dies. If the trees survive the winter, they will likely die the following year. Often, diseased trees will be grouped in one area of an orchard. When the roots are exposed, it is possible to differentiate root rots from winter injury. Winter injury is more likely to be on the trunk at or below the ground line. Disease injury will be evident near the union of the larger lateral roots with the main tap root. “Shoestrings” and “fans” of fungal tissue will also be present. Fruiting bodies (mushrooms or “toadstools”) may be found growing in clusters from the soil near the base of dead or dying trees. The caps of the clitocybe mushrooms are whitish to light tan, with those of A. mellea being tan to reddish brown. The gills (on the underside of the cap) of Clitocybe are white. There is no collar (annulus) on the stem. An annulus is present on the stem of A. mellea.

Because symptoms do not occur until the disease is well established, it makes the disease very difficult to control. To help prevent the disease, certain cultural practices may be followed: 1) If possible, do not plant a new orchard on recently cleared land, 2) Do not plant a new orchard on land where trees have been killed by root rot, and 3) In an orchard where trees have died of root rot in a localized area, dig a deep trench (six feet) around the area and leave it open for several years. Destroy all infected roots of killed trees in the area. After destruction of infected roots, the area should be planted to a non-tree crop.

Perennial cankers are oval to linear and when older are outlined by a roll of callus tissue. Cankers enlarge yearly until the infected limb or trunk is girdled. Spores are produced in tendrils from fruiting structures in diseased tissue under the bark and are disseminated by splashing and windblown rain. Infection is through bark damaged by freezing weather or through pruning wounds. However, pruning wounds, mechanical damage, insect feeding, or egg-laying punctures and leaf scars are also infection avenues. When temperatures are not favorable for the causal fungi, callus tissue forms. Fungus activity resumes when temperatures again favor the fungus.

No single control method is adequate for prevention or control of perennial canker. Several measures used in conjunction that will greatly facilitate control are recommended.1

Bacterial Spot of Leaves and Fruit

Bacterial spot infection of leaves appears as small circular to somewhat irregular, pale green to almost white spots first appearing on the underside. The spots enlarge, become angular and purple, brown to black. Tissue around the spots fades to a light yellowish green (Figure 5). Eventually, the centers may drop out, giving the leaf a ragged shot hole appearance. While individual spots are small, several may coalesce, involving large areas of leaves. Badly infected leaves may drop.

On fruit, bacterial spot first appears as small circular brown spots. As the disease progresses, the spots become darker and depressed, frequently with water-soaked margins (Figure 6). The most conspicuous phase is pitting and cracking of enlarging fruit. This renders fruit unmarketable.

Two distinct types of twig damage result from bacterial infection: “spring” and “summer” cankers. Spring cankers developing on young succulent tissues of the past summer’s growth form water-soaked blisters about the time leaves emerge from buds. If a canker encircles a twig, it will die. The epidermis of infected twigs ruptures later, releasing bacteria to be disseminated. The ruptured area heals during the summer. Summer cankers develop on new, current-season twigs, usually after leaf infections are established.

The best way to prevent bacterial spot is through the use of resistant varieties (See OSU Extension Fact Sheet HLA-6210, “Apple and Peach Varieties for Oklahoma”). 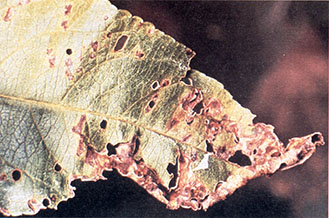 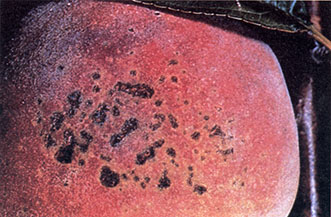 Crown gall, also called “plant canker” or “root tumor,” is caused by the bacterium Agrobacterium tumefaciens. This bacterium infects a wide host range of herbaceous and woody plants, including stone fruit trees. Crown gall is characterized by the early formation of small, smooth tumors which enlarge to eventually form hard, dark, woody galls that may be more than four inches in diameter. Galls are usually found on roots or on the crown, but in nurseries may also be found on the trunk.

To avoid crown gall, plant only disease-free nursery stock. Do not plant in soils known to be infested with the crown gall bacterium, as it can survive several years in the soil. Crop rotation using grain crops for several years will help in control of this bacterium. Destroy all infected trees. Do not replant trees in the same location.

Stone fruit trees are subject to several serious virus disease, but they usually are not a problem in Oklahoma because nursery trees are usually sold as certified virus-free. Most nurseries obtain seeds for rootstocks from virus indexed trees and use virus-free buds for grafting. Trees not certified as free of viruses should not be purchased.