Since pecans will not reproduce true from seeds, growers can’t just plant a good quality pecan nut and get a pecan tree like its parents. Instead, propagation of pecans requires grafting—an asexual propagation process that is really not difficult and often quite satisfying to those who try it. In fact, many persons who do this start with native or seedling pecans which grow by the thousands in creek and river valleys in 60 Oklahoma counties. By grafting a shoot (scion) containing buds from desirable stock to the native trees—they turn these less productive seedlings into some of the best adapted, productive trees.

The modified inlay bark graft process described here is one of the most convenient methods of pecan grafting. It basically involves cutting off most or the entire top of a small growing pecan tree, grafting desirable new graftwood at the cut, and then watching the tree produce a new top. This is done during April and May in Oklahoma, soon after growth starts and the bark begins to slip on the stock trees. The bark on the scion, or graftwood, must be tight, however. Stock for the grafts must be dormant when cut during the winter usually in late December through February and kept in cold storage until used.

Successful bud growth is on the way when callus tissue forms between the stock tree and the scion.

Scion – A section of scionwood to be grafted onto a stock. It is from a known variety one or two years old, 3/8 to 1/2 inches in diameter and 5 to 6 inches long.

Stock – A root, trunk or limb on which the scion is grafted.

Callus – A mass of cells that develop from and around wounded plant tissue. It occurs at the junction of the graft union, arising from the cambium of both scion and stock.

Grafting – The process of inserting the scion into the stock.

Stock trees — Select healthy, vigorous trees measuring one to four inches in diameter where the scion, or graft, will be set.

Graftwood — cut your own scions from desirable varieties from dormant wood and keep in cold storage until used; or, see your county Cooperative Extension educator for sources where suitable graftwood can be purchased.

First prepare the stock by sawing off the trunk or limb straight across with a sharp saw.  Make this cut immediately above a 6” to 10” straight smooth section of the stock at a convenient working height, (usually 4 or 5 feet).  Where cattle or horses are in the area, make the cut 6 to 8 feet above the ground.  If available, leave one to three branches below the cut to keep the tree actively growing and for future use as a “throttle” in regulating the growth of the graft.

1. Select a section of stock with a flat surface, preferably on the south or southwest side so the prevailing wind will blow the graft into the tree instead of away.  With a sharp knife, remove only the outer rough bark from an area large enough to conveniently accommodate the scion.  Leave the bark sufficiently thick to hold the scion securely. 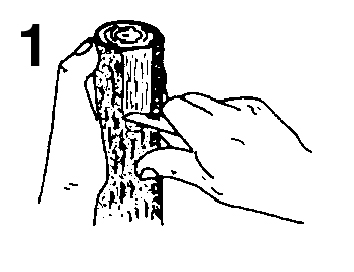 2. Choose a smooth, straight scion. Cut to about 6 inches long with 2 or 3 buds remaining. Make a smooth, straight sloping cut 2” to 3 1/2” long. Start this cut about 3” from the bottom of the scion on the opposite side and a little below a bud. This leaves an “insurance bud” in case the others fail to develop. Next, turn the scion over and make a chisel cut about 1/2” long on the back side at the lower end of the sloping cut. As an additional step, many grafters prefer to remove a thin layer of outside bark on both sides of the sloping cut, leaving a slight bevel. The bevel and the chisel cut provide additional cambium (uniting tissue) contact between the scion and the stock. The chisel cut also allows easier insertion of the scion. Keep hands free from the exposed areas. 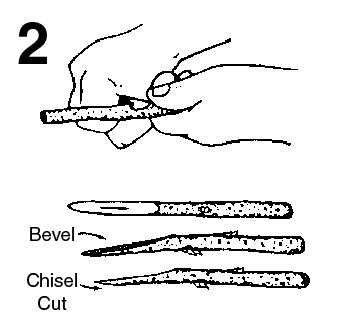 3. & 4. Place prepared scion on smooth area of stock. Make pattern cuts through the bark down to the wood along both sides of the scion. The pattern cuts should be approximately half the length of the sloping cut. This produces the inlay pattern from which the name inlay bark graft is derived. Perform all the grafting operations as quickly, yet as accurately, as possible. When practical, work with your back to the sun to form a shade over the exposed areas. 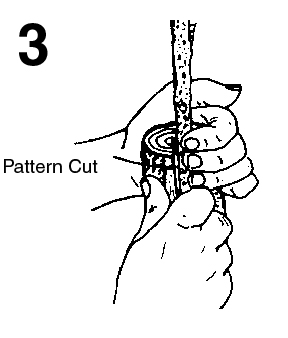 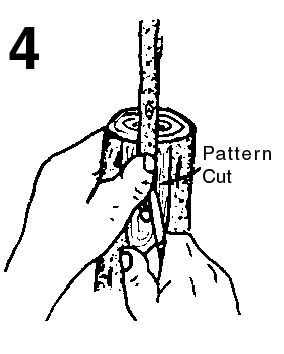 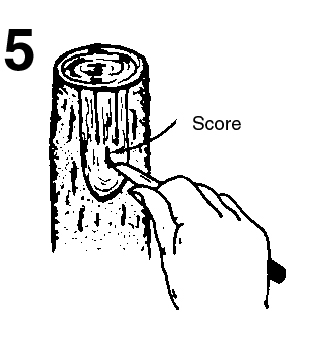 6. Loosen the flap (inlay) at the top with the tip of the knife blade. 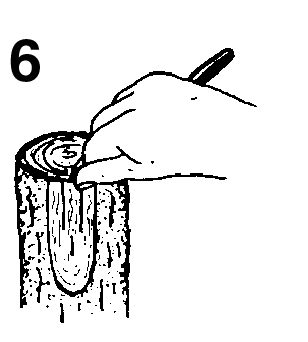 7. Start chisel end of scion into the slot with the sloping cut against the wood of the stock. 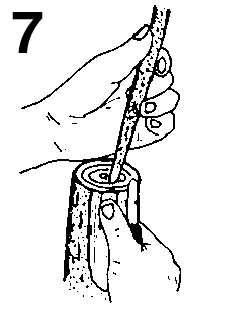 8. Maintain pressure on the flap with the thumb while firmly forcing the scion into the slot. Do not allow the flap to loosen more than necessary to insert the scion. 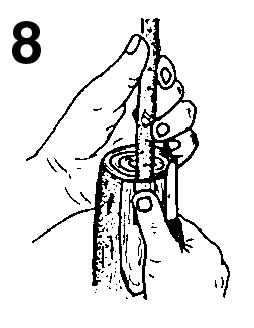 9. Leave approximately 1/8” of the sloping cut above the top of the stock to encourage callus tissue development and to provide secure anchorage of the scion. 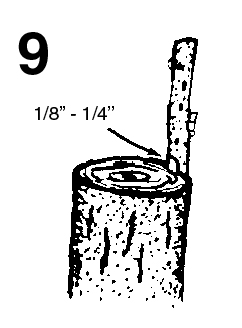 10. Remove about half of the bark flap and nail the scion firmly to the stock as shown. If the scion is small, do not nail. One No. 18 wire nail 5/8” to 3/4” long, depending on the size of the scion, is usually sufficient. Some grafters use a staple applied with a hand staple gun instead of the nail. The staple must be long enough to go through the scion. For additional support, a second nail or staple may be placed below the first through the flap and scion and into the stock wood. Wrap securely with masking tape or grafting tape. 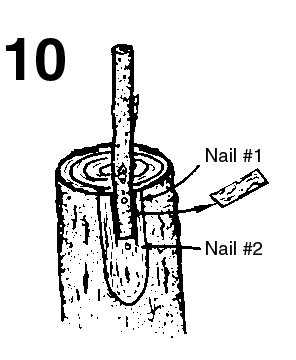 11. Take a piece of regular household aluminum foil, 8 by 12 inches, and wrap the upper 6” or 8” of the stock, covering the top also. Use the shiny side out. Permit the foil to extend up on the scion about 1/2”. Press the foil firmly with the fingers until it remains in place. 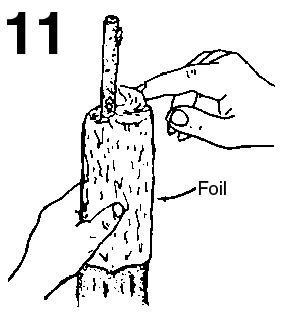 12. Clip the corner of a quart-size polyethylene bag and carefully slip it down over the stock with the scion protruding through the clipped corner. Watch the buds to make sure they do not get damaged as bag is applied. 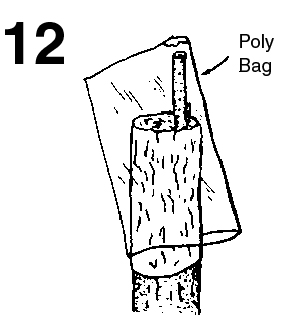 13. Use a medium-sized rubber band, masking tape, or grafting tape to secure the bag around the scion, at the cut corner just above the sloping cut. 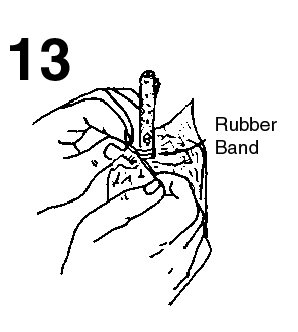 14. Tie the bag around the stock with string or masking tape to prevent its blowing off. 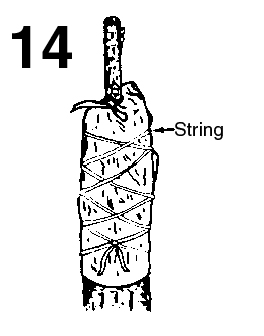 At this point, many grafters use amber shellac to coat the top and sides of the scion down to the polyethylene bag. Make sure the shellac is water based amber or orange shellac.

Another helpful strategy to protect the graft is attaching a bird perch below the graft that extends up above the graft union. The perch can be a bamboo stake or a stick that was removed from the rootstock. This provides birds with another area to sit without wiggling and loosening the graft union.

A new modification to the Bark Graft called the “American Method” is being used by some grafters. The adaptation, developed in Oklahoma, uses the same grafting procedure through steps #1-9 as the normal bark graft. At step number 10, the bark flap is left intact and duct tape is used to secure the graft union. No nails, foil or plastic bags are used. The graft union is taped securely with duct tape around the top of the rootstock and covers the cut surface of the rootstock as well. A smaller piece of duct tape is used to cover or wrap the scion wood cut exposed at the top as seen in drawing #9. After tape is in place, school glue is applied to the tip of the scion wood and a bird perch is attached.

Aftercare of the Graft

The care of the tree during the first few years after grafting is as important as the operation itself.

A successful graft will usually begin growth in about three weeks, but can be slower if graft is performed early and the weather is cool. Grafts from two-year-old wood are usually slower to start growth than those from one-year-old wood.

Shoots from the graft may grow so rapidly that they become top-heavy and are easily damaged by wind. Such shoots should be supported by tying them to one-by-two inch stakes nailed to the stock. Excessive growth may be reduced by removing the growing tips of shoots after they have made a growth of 20 to 30 inches.

About three years are required to grow a new top from the scion. During this time, the native branches should be removed. For example, if three native branches were left on the stock, remove one each year. This practice depends upon the vigor of the tree and graft. Delay removal of these native limbs if the grafts are making excessive growth. Likewise, hasten their removal if the graft is growing slowly. Remove the native branches flush with the main trunk.

Train the new tree to a central leader system by cutting back or removing side branches that crowd and compete with the leader. Consult HLA-6245  for more information on Training Pecan Trees.