Alfalfa stem nematode, Ditylenchus dipsaci, sometimes referred to as “bulb and stem nematode,” is one of a few species of nematodes that feed on parts of plants above ground.  This nematode occurs in almost every alfalfa-growing area of the world and is recognized as the most serious nematode problem for this crop. The race (strain) of stem nematode that infests alfalfa has several other hosts where it can survive, but only reproduces on alfalfa and sainfoin. Alfalfa is the only major crop in Oklahoma that is seriously damaged by this nematode.

Although stem nematode is usually not a widespread problem for alfalfa production in Oklahoma, it can be devastating in individual fields. The number of fields infested with stem nematode varies from year to year based on the weather conditions that occur during late winter and early spring. During this time, increased populations of stem nematode and feeding activity are favored by cool, wet weather. Infestations are most common in fields containing soil with a high clay content, and damage is most severe under irrigation and during years with heavy rain. A stand of alfalfa can decline rapidly after stem nematodes become established, even to the point that production of a stand will be unprofitable within a year’s time.

Stem nematode symptoms are most readily observed during early spring in established alfalfa stands. The most recognizable symptom is patches of stunted plants with twisted and deformed “mouse ear” size leaves (Figure 1). The infected leaves often have a crinkled appearance. The crinkling is restricted to areas between veins, unlike that caused by thrips damage, which crosses the veins. Stunted plants typically have swollen nodes and shortened internodes (Figure 2) that can be mistaken for symptoms caused by blue aphids. Infected stems become brittle and break off easily at the crown. Crowns of infected plants are swollen, discolored, spongy, and produce few stems. A very small percentage of infected plants may have one or more stems that are completely white. This symptom is referred to as “white flagging” and is more prevalent on regrowth following the first cutting. However, the “white flagging” also can be caused by other problems. Severely infected plants eventually die. Blank spaces become evident in the field and may become invaded by weeds. 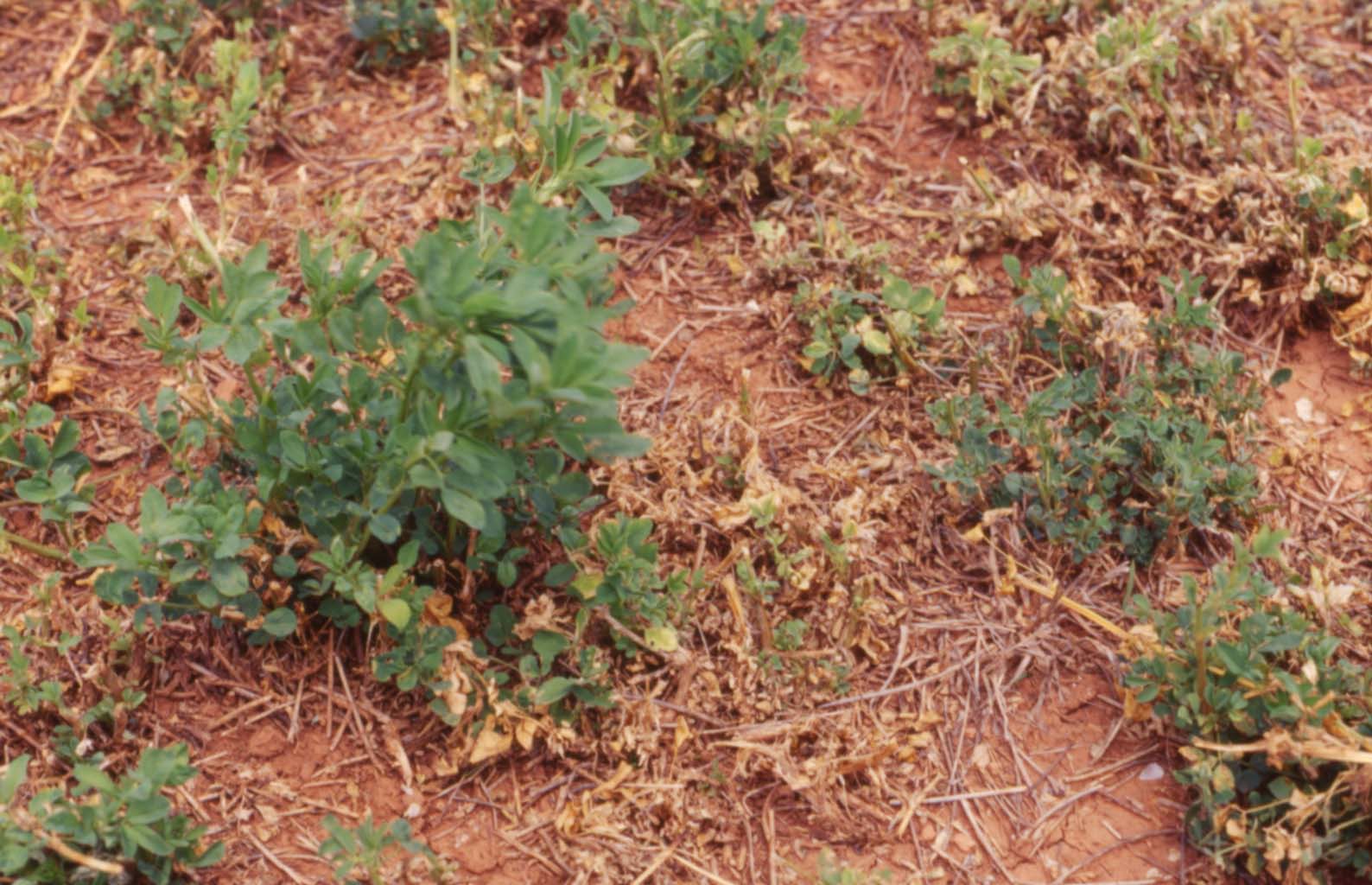 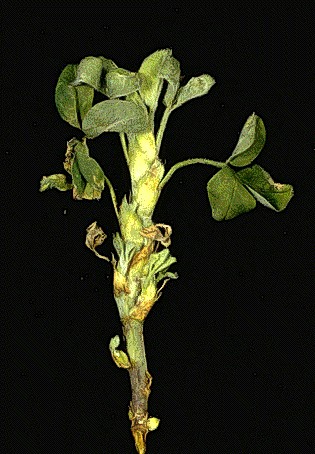 Stem nematodes, like other plant parasitic nematodes, are microscopic roundworms with a hollow, needle-shaped stylet used to puncture plant tissue for feeding (Figure 3). Stem nematodes survive unfavorable periods in the crown of infected plants, infested hay and crop debris, seed, and in soil. Survival in soil probably does not exceed two years under normal rainfall or irrigation. Long-term survival is possible under very dry conditions in hay, seed, and soil. 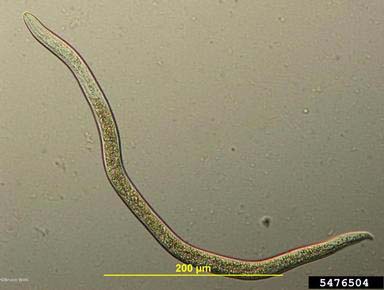 Figure 3. Microscopic view of a stem nematode (photo courtesy of B. Watt, University of Maine, bugwood.org).

The nematodes are spread to new areas by surface water runoff, irrigation, wind-blown crop debris, soil and crop debris clinging to equipment, humans and livestock, and with seed.  Runoff water is very important in the spread of stem nematodes within a field and to adjacent fields.  Stem nematodes are especially well suited to be spread by farm machinery because of their ability to withstand desiccation.  A common location for a new stem nematode infestation is near the gate or other usual point of entry into a field.  This may be partly due to movement on farm equipment; however, more often the infestation can be traced to infested hay fed to livestock at that location while the dormant stand was being used for winter pasture.  Wind also appears to play a role in dissemination of stem nematodes.  New infestations are less commonly found upwind from farm-to-market roads than downwind from prevailing winds.

When free moisture is present on stems and leaves, the nematode moves rapidly up the outside of a plant and begins feeding in the buds.  The nematode reproduces to high levels during periods of favorable temperature and rapidly spreads when plants are wet.  A complete life cycle from egg to adult takes between 19 and 23 days at optimum temperatures of 59-70° F.  Because these conditions usually occur during early spring or mild winters, damage is most severe in the first cutting.  When moisture is limited and temperatures are high, stem nematode spreads through internal tissues, but at a much slower rate.  This slower movement may permit infected plants to outgrow the infestation as the summer progresses.  However, damage and resulting spread reappears when conditions again become favorable.

To be certain that stem nematodes are causing the problem, leaves and stems of suspected plants should be checked for the nematode. Collect leaves and stems from several plants exhibiting symptoms of nematode infestation. The sample should be sealed in a plastic bag and mailed to the OSU Plant Disease Diagnostic Laboratory. Avoid exposing bagged samples to excessive heat or cold so that the nematodes remain alive until the sample reaches the lab. Refer to OSU Extension Fact Sheet EPP-7610 for the correct way to collect and submit nematode samples.

Chemical control with insecticides or nematicides is not an effective management strategy. Some insecticides also are nematicides, but they have not been shown to be effective for stem nematode control at the labeled rates. Therefore, the application of economic thresholds for stem nematode is of little value. Decisions on whether to wait or plow up established alfalfa stands are based on the severity of observed symptoms and yield reduction, rather than nematode populations per gram of forage. Control of stem nematode requires the integrated use of the following cultural practices:

Efforts should be made to prevent the introduction and limit the spread of stem nematodes into new areas. When working in an infested field, clean crop debris and soil from equipment before entering a clean field. Remove all dry hay and dust clinging to balers or other equipment because stem nematodes have the ability to withstand very dry conditions. Where possible, situate new fields upwind of infested fields and where runoff is not received from an infested field. Because stem nematode is most severe in the first cutting, harvest when the top two to three inches of the soil is dry to reduce infection of new growth. Rainfall or irrigation before or soon after cutting promotes invasion of new buds.

Rotation of alfalfa with crops such as small grains, sorghum, corn, cotton, and soybean for two to four years will reduce stem nematode populations.  The greatest benefits can be expected from longer rotations.  However, low numbers of the nematode may survive during the rotation period and begin to increase when alfalfa is reintroduced.  Volunteer plants must be controlled during the rotation period.

Several alfalfa varieties are reported to have some level of resistance to stem nematode.  Planting a resistant variety should be considered where stem nematodes persist as a problem.  Unfortunately, the level of resistance to stem nematode in currently available varieties is not very high.  Therefore, even the best varieties may become infected and develop symptoms during years with extended periods of wet, cool conditions.  Check with your local OSU County Extension Educator – Agriculture for a current list of alfalfa varieties that perform best in Oklahoma.  The Plant and Soil Sciences Department regularly publishes a listing of the best varieties for Oklahoma.

Orthoptera is the order of insects that includes grasshoppers, katydids and crickets. These insects are recognizable by their shape and the presence of jumping hind legs.

Insects, Pests, and DiseasesWeed ControlWeeds & Invasive Plants
VIEW ALL
Back To Top
Back To Top
©